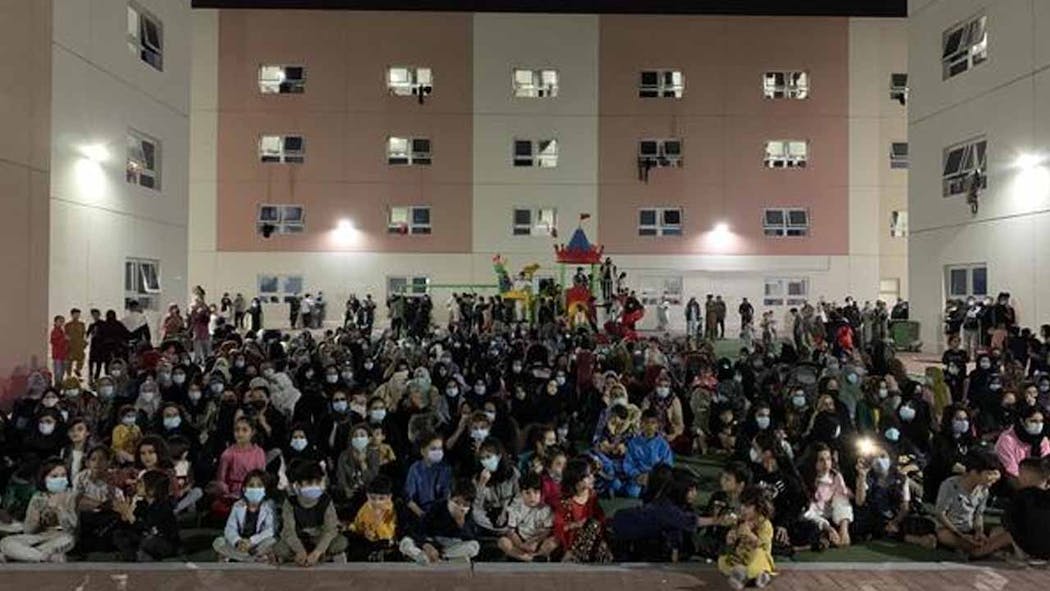 Fatima's application to enter the U.S. on humanitarian grounds has been pending for her entire life.

In September, Fatima will turn 1, as will the emergency immigration application that was submitted to the U.S. government on her behalf a week after her birth.

Against seemingly insurmountable odds faced by other Afghans seeking U.S. entry, Fatima's parents were granted special permission to enter the U.S. last year because of her father's work in the Afghan presidential palace before the Taliban reconquered Afghanistan, government documents show.

But the U.S. has yet to adjudicate the application filed on behalf of Fatima, who was born just 16 days after her parents' petitions were approved. The 10-month wait has placed the family in legal and emotional limbo, testing their faith in the U.S. and its promise of providing refuge to vulnerable Afghans.

"We are in a very bad situation," said Fatima's father, Mohammed, whose application for humanitarian parole, the special permission to enter the U.S., was granted on September 1, 2021. "Day by day, the situation is tough. This is exactly like a prison."

The family has been stuck in the United Arab Emirates since their evacuation from Afghanistan in October 2021. They asked for their names to be changed, citing concerns about their safety and that of relatives in Afghanistan due to Mohammed's work as a high-level official in the presidential palace.

Mohammed, his wife and Fatima are among thousands of Afghan evacuees who have been stranded in third countries for months — and in many cases, for close to a year — anxiously waiting to find out whether the U.S. will agree to resettle them, even nearly a year after the fall of Kabul and the chaotic U.S. evacuations.

Roughly 6,500 Afghan evacuees remain at the Emirates Humanitarian City, an apartment complex in the outskirts of Abu Dhabi that the United Arab Emirates (UAE) agreed to convert into a makeshift refugee housing facility, according to previously undisclosed U.S. State Department data shared with CBS News.

Some of the Afghans in the Humanitarian City arrived in the UAE last summer, soon after the U.S.-aligned government in Kabul collapsed. Others were evacuated from Afghanistan last fall on charter flights overseen by nongovernmental groups.

They include Afghans hoping to receive a Special Immigrant Visa because they assisted the U.S. war effort; families and individuals who believe they could be harmed by the Taliban because of their work, ethnicity, gender or other reasons; and other evacuees who managed to get on an evacuation flight.­

Unlike more than 70,000 Afghans who were directly evacuated and then quickly resettled by the U.S. last year after some security vetting, those living in the Humanitarian City have been subjected to a slower, case-by-case immigration review by U.S. officials that does not include a guarantee of U.S. resettlement.

U.S. policy is responsible for the disparate processing. Afghans who were evacuated to the UAE before Aug. 31, 2021, were effectively guaranteed permission to enter the U.S. if they passed certain medical and security checks, the State Department told CBS News. But those who arrived after Aug. 31, 2021, have been required to prove they qualify for a U.S. immigration benefit, such as a visa or refugee status.

Kabul fell to the Taliban on Aug. 15, 2021, and the last U.S. military planes left the country just before midnight on Aug. 31. The rapid takeover sparked a humanitarian crisis, displacing millions of Afghans. Hundreds of thousands crossed the border into neighboring Pakistan, including unregistered refugees living in makeshift shelters who told CBS News about their plight in June. In a U.S. military base in Kosovo, Afghan evacuees subjected to heightened vetting told CBS News they felt "like prisoners."

But the State Department acknowledged that not all Afghans in the Humanitarian City will qualify for U.S. resettlement, saying it has been urging other countries to resettle those evacuees.

"The United States is fully committed to supporting Afghans at Emirates Humanitarian City to reach their final destination," the State Department said in a statement. "We expect to welcome thousands more individuals to the United States in the near term as our commitment to our Afghan allies is enduring."

But advocates have argued that Afghans at the Humanitarian City have been unjustly treated differently, and even ignored, simply because of the plane they were evacuated on and who oversaw their evacuation.

Joseph Robert, a U.S. veteran who oversaw the evacuation and relocation of some Afghans to the UAE, said it has fallen on private American citizens and the Emirati government to help at-risk Afghans who were left behind following the hurried U.S. military withdrawal.

"Those Afghans in the UAE have been left in limbo, uncertain of their future, unable to provide for their loved ones still suffering in Afghanistan, while the burden of support has been left in the hands of the American people and a foreign nation that sacrificed their time, money, and resources to do what was right," Robert said.

While it's unclear whether there's a firm deadline to relocate the remaining Afghans at the Humanitarian City to the U.S. or third countries, a facility in Leesburg, Virginia, that has been used by the Biden administration to process new Afghan arrivals is set to run out of congressional funding at the end of September.

It's also unclear how long the Emirati government is willing to provide housing and other basic necessities to Afghans. In a statement to CBS News, the UAE government said it was working with the U.S. "to resettle Afghan evacuees in a timely manner," noting the deal to house them was made on a "temporary basis."

"The UAE remains committed to this ongoing cooperation with the US and other international partners to ensure that Afghan evacuees can live in safety, security, and dignity," the Emirati government added, saying it is providing sanitation, health, clinical, counseling, education and food services to Afghans.

For Mohammed, the former presidential palace official, the wait has become unbearable. Whenever they see other Afghans leave the Humanitarian City, his family feels a sense of hopelessness, Mohammed said.

The situation has been made worse, he said, by the fact that they are not allowed to leave the Humanitarian City. "Day and night, we are in the room," Mohammed added, saying the prolonged and indefinite stay has harmed his family's mental health.

Elizabeth Rieser-Murphy, an attorney for the Legal Aid Society who is representing Mohammed's family, said the baby's humanitarian parole application should be prioritized by U.S. Citizenship and Immigration Services (USCIS) because of her age and the agency's approval of her parents' petitions.

"We understand that USCIS has limited resources given the number of pending parole applications, but this situation is an exceptional circumstance. It is unfair and inhumane to keep this family in limbo," Rieser-Murphy said, noting the family has U.S. citizen relatives in New York ready to welcome them.

Since July 2021, USCIS has received approximately 48,900 humanitarian parole requests from Afghans abroad, unpublished USCIS data show. Out of the 8,427 parole applications it had adjudicated as of July 28, USCIS denied 8,058 cases, or nearly 96% of them, according to the agency data.

If his baby is not allowed to enter the U.S. and his family is forced to return to Afghanistan, Mohammed said he could be imprisoned or even killed, citing accounts of former Afghan government officials disappearing or being slain by the Taliban.

"Maybe this is the future of our lives," he said.