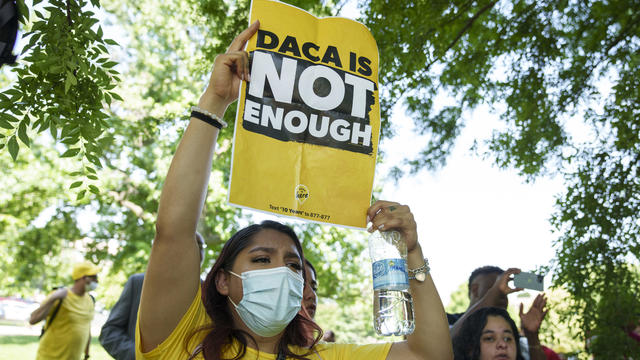 The Biden administration on Wednesday finalized a rule to transform the Deferred Action for Childhood Arrivals (DACA) immigration policy for more than 600,000 so-called "Dreamers" into a federal regulation, a move aimed at protecting the program from legal challenges that imperil its existence.

The Department of Homeland Security (DHS) rule is set to take effect on Oct. 31 and will codify the Obama-era program, which has been governed by a 2012 memo for a decade, into the federal government's code of regulations.

Since its inception, DACA has allowed hundreds of thousands of unauthorized immigrants who arrived in the U.S. as children to live and work in the country legally without fear of deportation. As of March 31, 611,270 immigrants were enrolled in DACA, government data show.

While technical in nature, the change announced Wednesday is designed to address some of the Republican-led legal challenges against the DACA, which a federal judge in Texas last year closed to new applicants.

Unlike the 2012 DHS memo that created DACA, the new regulation underwent a months-long rule-making process that was open to comments from the public, steps that the federal judge in Texas said the Obama administration should've undertaken before implementing the policy.

"Today, we are taking another step to do everything in our power to preserve and fortify DACA, an extraordinary program that has transformed the lives of so many Dreamers," Homeland Security Secretary Alejandro Mayorkas said in a statement to CBS News. "Thanks to DACA, we have been enriched by young people who contribute so much to our communities and our country."

The regulation will maintain the longstanding eligibility rules for DACA, which include requirements that applicants prove they arrived in the U.S. by age 16 and before June 2007; studied in a U.S. school or served in the military; and lack any serious criminal record.

DACA recipients will continue to be eligible for work authorization under the new rule, as well as considered to be "lawfully present" in the U.S. for the purposes of other immigration applications.

Even with the regulation, however, DACA will remain in legal jeopardy. U.S. District Court Judge Andrew Hanen, who closed DACA to first-time applicants in July 2021, ruled that the policy itself violates federal immigration law, as Texas and other Republican-led states have argued in a lawsuit.

The 5th Circuit Court of Appeals, which held a hearing in July on the Biden administration's appeal of Hanen's ruling, is expected to issue an opinion on DACA's legality later this year. The conservative-leaning appeals court is expected to side with Republican state officials who argue that DACA is unlawful. The Biden administration could appeal such a ruling to the Supreme Court.

The ongoing litigation could keep DACA closed to new applicants and even lead to its complete termination, a scenario that would bar the program's beneficiaries from working in the U.S. legally and render them eligible for deportation, though they would likely not be prioritized for arrest under the Biden administration.

Such an outcome would also reignite legislative efforts to place DACA recipients on a path to U.S. citizenship. Despite bipartisan support for Dreamers, Congress has repeatedly failed to create such a path amid more than 20 years of gridlock over other immigration issues, including U.S. border policy.

Congress' failure to pass these so-called "Dream Act" proposals prompted the Obama administration in 2012 to create DACA, which utilizes a longstanding immigration policy known as "deferred action" to shield beneficiaries from deportation and render them eligible for work authorization.

Former President Donald Trump's administration tried to end and scale back DACA, calling it illegal. Its efforts, however, were halted by federal courts, including the Supreme Court, which in June 2020 said officials had not followed the proper procedures to terminate the program.

In his statement Wednesday, Mayorkas urged lawmakers to provide "an enduring solution for the young Dreamers who have known no country other than the United States as their own."

A recent poll by the liberal group Immigration Hub and Democratic polling outfit Hart Research showed that 65% of surveyed voters in states with competitive congressional elections this November would want Congress to grant relief to DACA recipients if the program is struck down in court.

Flavia Negrete, a DACA beneficiary who came to the country as a 4-year-old, expressed frustration that her fate has been dictated by a "chess game" among politicians in Washington, D.C. The Maryland resident hopes to attend medical school to study gene therapy, but those plans could be derailed if DACA is shut down.

"I don't want someone in Congress debating whether I can work tomorrow, or whether I can go see a doctor tomorrow," Negrete told CBS News on Wednesday. "I think that these are two things that belong to me, rightly so. And I'd like to take ownership over that."