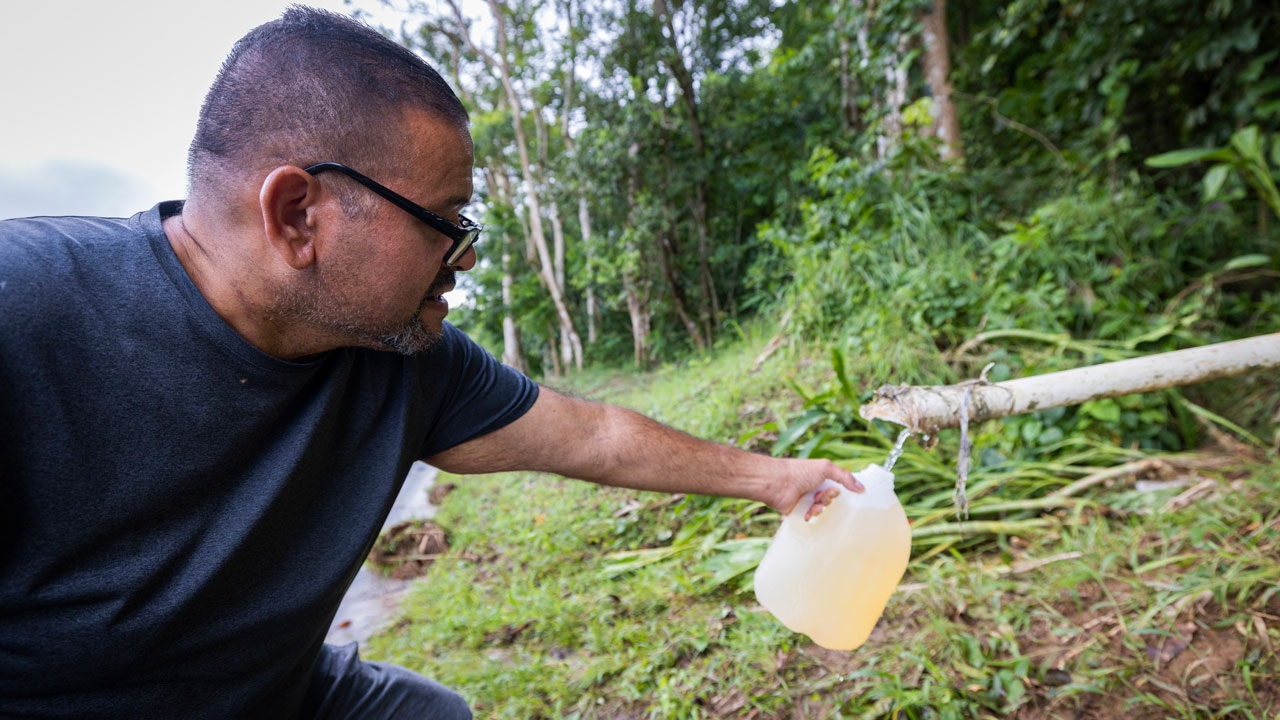 More than a half million people in Puerto Rico remained without water service three days after Hurricane Fiona slammed into the U.S. territory, and many spent hours in lines Wednesday to fill jugs from water trucks while others scooped water from mountain runoff.

Sweat rolled down the faces of people in a long line of cars in the northern mountain town of Caguas, where the government had sent a water truck, one of at least 18 so-called “oases” set up across the island.

The situation was maddening for many people across an island once again left without basic services following a storm.

“We thought we had a bad experience with Maria, but this was worse,” Gerardo Rodríguez said in the southern coastal town of Salinas, referring to the 2017 hurricane that caused nearly 3,000 deaths and demolished the island’s power grid.

Fiona dumped roughly two feet of rain on parts of Puerto Rico before blasting across the eastern Dominican Republic and the Turks and Caicos Islands.

Swelled to Category 4 force, the storm was on a track to pass close by Bermuda early Friday and then hit easternmost Canada early Saturay, according to the U.S. National Hurricane Center.

The storm played havoc with Puerto Rico’s electrical grid, which had been patched but never fully rebuilt after Maria caused a blackout that lasted 11 months in some places.

As of Wednesday afternoon, roughly 70% of Puerto Rican customers lacked electricity, according to government figures.

In Caguas, the air conditioning of Emayra Veguilla’s car wasn’t working, so the bus driver propped up a small fan in the passenger seat. Earlier, she had blasted the song “Hijos del Canaveral” (“Sons of the Sugarcane Field”), written by Puerto Rican hip-hop star René Pérez as an ode to Puerto Rico and its people’s bravery.

“I needed a shot of patriotism,” she said. “I needed strength to do this once again.”

Veguilla had waited in line Tuesday, only to be told that the water had run out and that another truck would not be available until Wednesday.

Some people ahead of Veguilla gave up and drove away, with tensions running high the longer people waited.

“Move!” yelled one driver, fearful of people trying to cut in.

Some who saw the line opted instead to drive to a nearby highway where fresh water trickled down the mountainside via a bamboo pipe that someone had installed.

Greg Reyes, an English teacher, stood in line in muddy flip-flops to collect water for himself, his girlfriend and their cat. He had brought a large bag holding all the empty containers he could find in their house, including more than a dozen small water bottles.

Reyes said he and his partner had been buying water since Fiona hit, but couldn’t afford to do so any longer.

Standing behind him was retiree William Rodríguez, surrounded by three large buckets and four gallon containers. He had been living in Massachusetts and decided to return to Puerto Rico about six months ago.

“But I think I’m leaving again,” he said as he shook his head.

Those in the line grumbled about the slow pace of recovery and accused the government of not helping them as people on social media and even a gym said their doors were open to anyone who needed water or a shower.

“This hasn’t been easy,” said Juan Santos, a retiree who held the hand of his 5-year-old grandson. “We are suffering.”

None of those in line had power either, and many wondered if it would take as long to restore as it did with Hurricane Maria.

Power company officials initially said it would take a few days for electricity to be restored, but then appeared to backtrack Tuesday night, saying they faced numerous obstacles.

“Hurricane Fiona has severely impacted electrical infrastructure and generation facilities throughout the island. We want to make it very clear that efforts to restore and reenergize continue and are being affected by severe flooding, impassable roads, downed trees, deteriorating equipment, and downed lines,” said Luma, the company that operates power transmission and distribution.

But Luma said it expected to restore power Wednesday to much of Puerto Rico’s north coast, which Fiona largely spared.

The hum of generators could be heard across the territory as people became increasingly exasperated.

“I continue to hope that by the end of today, a large part of the population will have these services,” said Puerto Rico Gov. Pedro Pierluisi.

The head of the Federal Emergency Management Agency traveled to Puerto Rico on Tuesday and the agency announced it was sending hundreds of additional personnel to boost local response efforts. On Wednesday, U.S. President Joe Biden approved a major disaster declaration, which would allow for more federal assistance.

Meanwhile, the U.S. Department of Health and Human Services declared a public health emergency in Puerto Rico and deployed a couple of teams to the island.

In the Turks and Caicos Islands, officials reported relatively light damage and no deaths, though the eye of the Category 4 storm passed close to Grand Turk, the small British territory’s capital island, on Tuesday.

“Turks and Caicos had a phenomenal experience over the past 24 hours,” said Deputy Gov. Anya Williams. “It certainly came with its share of challenges.”

Officials said school on Grand Turk would reopen next week.

Fiona killed a man in the French overseas department of Guadeloupe and two others in Puerto Rico swept away by swollen rivers. Two died in the Dominican Republic: one killed by a falling tree and the other by a falling electric post.

Two additional deaths were reported in Puerto Rico as a result of the blackout: A 70-year-old man burned to death after he tried to fill his running generator with gasoline and a 78-year-old man police say inhaled toxic gases from his generator.