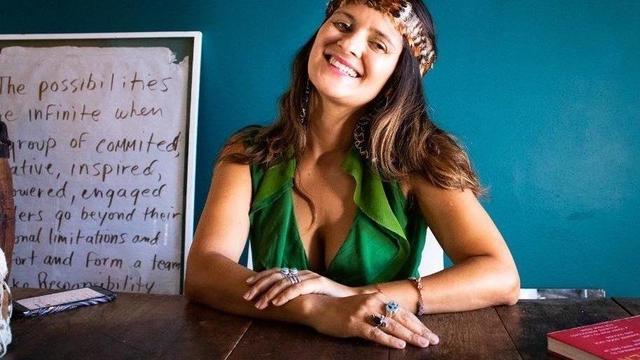 A mother has been killed in the second deadly shark attack to hit the same popular tourist area this year. South Africa's National Sea Rescue Institute said it was alerted just before 8 a.m. on Sunday morning and immediately launched a sea rescue craft off a beach in the Plettenberg Bay area.

The woman's body was found just minutes later. The 39-year-old victim was identified as Kimon Bisogno, a pizza restaurateur who was well known in her local Cape Town community. She helped start a local soup kitchen that served pasta to homeless people each week.

Bisogno was on on the beach with her husband and young child, on vacation several hundred miles from their home in Cape Town, at the time of the attack.

Dr. Sara Andreotti of Stellenbosch University has studied great whites off the South African coast for the last 15 years and told CBS News that two attacks in one year is extremely rare.

"Globally, there are generally six shark fatalities a year, so two in one area is almost unheard of," she told CBS News

A 2016 survey from the University of Stellenbosch found there were roughly 500 great white sharks along South Africa's coastline. Based on a multitude of factors, Andreotti expects that number would be significantly lower today.

"There are 37 beaches on the South African coast that have some kind of shark preventative measure, such as a shark net or drum line (baited hook) that would ensure that number has decreased even further," she said.

The shark expert believes education, not such harmful methods, is the way to best mitigate against future attacks.

"Teaching communities shark conservation, such as seasonal changes for sharks, time of day for hunting, weather patterns to look for, can equip locals with knowledge to best mitigate future attacks," Andreotti said.

The local Bitou municipality, where Plettenberg Bay is located, agrees, and in May of this year it approved research on shark education measures.

Cape Fur seal populations — food for great whites — are based largely on islands off the coast, or on more remote beaches, but experts say Plettenberg Bay is slightly unique as there's a population of seals there that live closer to popular beaches.

Scientists say some local knowledge of the local marine species can help in the community's preparedness.

At this time of year, as the southern hemisphere's spring arrives, seal pups born last summer are now old enough to hunt and venture out further alone. For predators the young seals are easy prey, making it an ideal time for hunting.

Sharks typically hunt in the early morning or late afternoon, depending on water visibility and weather patterns. Scientists hope this kind of specific, local information, as well as shark spotters, drones and other measures, can help prevent further attacks and ease fear in beach communities.

Plettenberg Bay is a major tourist destination, and local businesses have worried about the impact of the two recent attacks on the looming summer holiday season. The beaches in Plettenberg Bay remain closed.

"As a global community, we have a much deeper understanding of measures we can now take to mitigate, as best we can, future attacks, while not threatening shark populations or throwing entire, very fragile ecosystems off balance," she said.