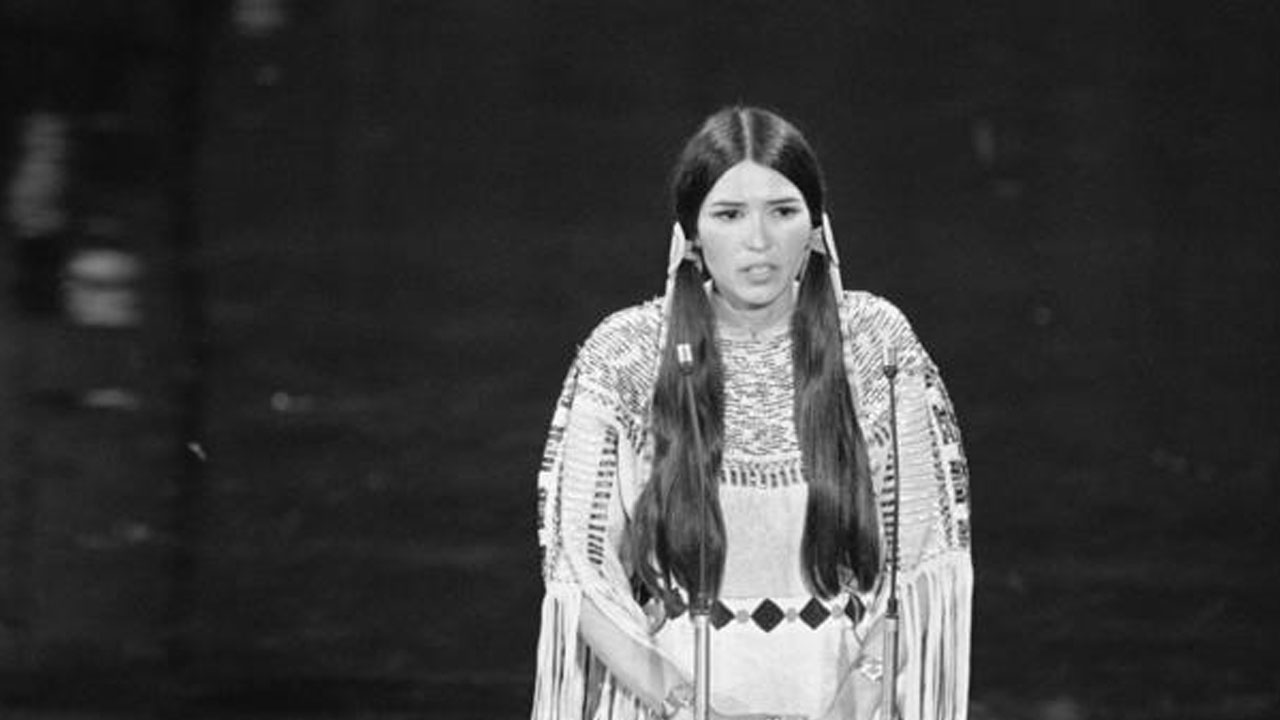 Sacheen Littlefeather, the Native American civil rights activist best known for declining Marlon Brando's best actor Oscar for "The Godfather" in 1973, has died at the age of 75, the Academy of Motion Picture Arts and Sciences and her family announced late Sunday.

She died peacefully at home in Marin County, Calif., surrounded by loved ones, the academy said. She was suffering from breast cancer, her family said.

In a tweet with word of her death, the academy quoted her as saying, "When I am gone, always be reminded that whenever you stand for truth, you will be keeping my voice and the voices of our nations and our people alive. I remain Sacheen Littlefeather. Thank you."

At the October 1973 Academy Awards ceremony Littlefeather, wearing buckskin dress and moccasins, became the first Native American woman to take the stage at the Oscars.

In a strictly timed 60-second speech, she said Brando couldn't accept the award.

Her family said Sunday that Littlefeather turned down the Oscar on Brando's behalf in an effort to "end the stereotyping of Native people in the film, television, and sports industries."

"As a result, Sacheen was professionally boycotted, personally harassed and attacked, and discriminated against for nearly 50 years," the statement continued.

She was booed by some in the Oscars audience. John Wayne, who was backstage, was reportedly furious.

And in a 2021 interview with The Guardian, Littlefeather said, "During my presentation, [Wayne] was coming towards me to forcibly take me off the stage, and he had to be restrained by six security men to prevent him from doing so."

She also told The Guardian people were imitating stereotypical war cries and making offensive hand gestures when she arrived backstage.

The academy said Sunday "her presence on the Academy Awards stage, widely acknowledged to be the first political Oscars speech, also brought attention to the AIM [American Indian Movement] protests at Wounded Knee in South Dakota" at the time.

In June, the Academy formally apologized for her treatment by Hollywood in a letter from then-Academy President David Rubin.

"The abuse you endured because of this statement was unwarranted and unjustified," Rubin wrote. "The emotional burden you have lived through and the cost to your own career in our industry are irreparable. For too long the courage you showed has been unacknowledged. For this, we offer both our deepest apologies and our sincere admiration."

Littlefeather said in a statement that it was "profoundly heartening to see how much has changed since I did not accept the Academy Award 50 years ago."

In September, what the family described as a "heartfelt honoring" was held at the Academy Museum's David Geffen Theater in Los Angeles "with a sold-out audience in attendance."

"Even though many people were judgmental of Sacheen and treated her in a negative way, she forgave them all, did not hold grudges, and moved on with her life in a positive way, showing everyone love and forgiveness," the family said.

According to the family, Littlefeather was a model and an actress known for roles in "Billy Jack" in 1974, "Winterhawk" the following year, "Reel Injun" in 2010 and "Sacheen: Breaking The Silence," in 2018.

A Requiem Mass for Littlefeather is scheduled for later this month at St. Rita Church in Fairfax, Calif.