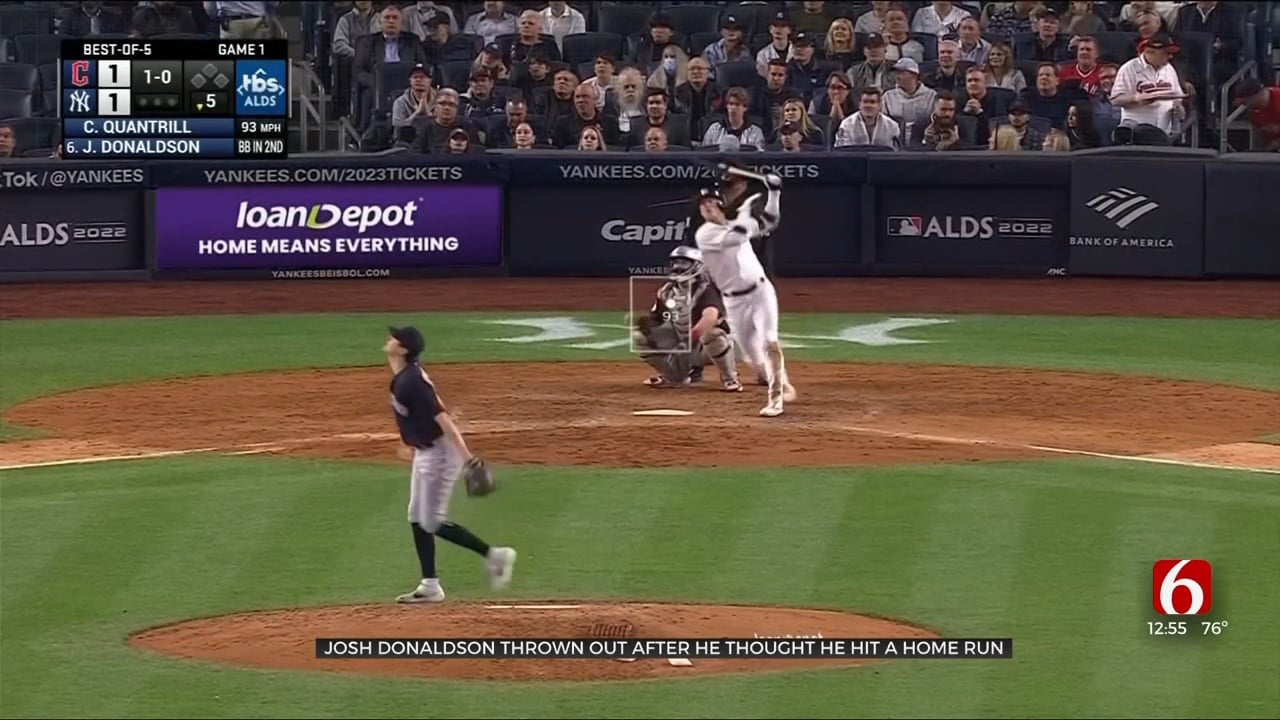 Josh Donaldson didn’t run hard. He didn’t answer questions about it, either.

The veteran slugger went into a home run trot too soon — and his latest failure to hustle turned into an embarrassing out in the playoffs.

Leading off the fifth inning for the New York Yankees in their AL Division Series opener Tuesday night, Donaldson sent an opposite-field drive to right against Cleveland starter Cal Quantrill with the score tied 1-all.

Certain the ball would clear the short porch at Yankee Stadium, Donaldson put his head down and slapped hands with first base coach Travis Chapman as he jogged around the bag.

“I thought for sure it was a home run,” teammate Anthony Rizzo said.

Little did Donaldson realize, though, the ball was still in play. As a fan in a Yankees jersey reached for it, the ball ricocheted off the top of the fence right back to rookie Óscar González, who alertly fired to shortstop Amed Rosario at second base.

By the time Donaldson looked up, he was trapped between first and second. He tried to scramble back to first, but Rosario threw to first baseman Josh Naylor, who tagged out Donaldson as he dove headfirst back toward the bag.

“He ain’t the fleetest of foot. So we have to make sure we’re getting where we need to get to,” Yankees manager Aaron Boone said.

A confused Donaldson pointed toward right field and spread his arms — but replays showed the ball never cleared the wall. A video review confirmed the call by right field umpire Mark Ripperger that it was not a home run and the ball stayed in play.

Donaldson was credited with a single.

After the Yankees won, he was not available to reporters in the clubhouse.

“It’s a unique one down that line like that. You’re kind of body-languaging it,” Boone said.

“I haven’t even seen the play yet because I was getting out of the way of some people to see where — because I thought it was a home run off the bat. So I have got to look at it a little bit better.”

It was hardly the first time Donaldson’s lack of hustle became an issue for the Yankees this year.

In his first season with the team after arriving from Minnesota in a March trade, the 2015 AL MVP failed to run hard on a groundout in May — and Boone took notice.

“Donaldson probably took his eye off it for a second,” Boone said then. “Now and then, you’ve got to say something. I’ve not said something yet.”

Boone pulled Donaldson aside and had a word with him.

“Let’s not let that happen,” Boone said he told Donaldson.

“I don’t really worry about him from the game or hooked up standpoint; he’s locked in,” the manager added. “Yeah, that’s one of those, you’ve got to make sure. You better be sure.”

New York scored a run in the fifth following Donaldson’s gaffe, and Rizzo added a two-run homer in the sixth on the way to a 4-1 victory.

“I’m glad it didn’t end up hurting us,” Boone said.

Game 2 in the best-of-five series is Thursday night at Yankee Stadium.

Matt Bateman, a 44-year-old fan from Brooklyn, was the man closest to Donaldson’s drive who reached for the ball.

“It was hit right at us,” Bateman said. “It seemed like the ball hit the top of the wall. It hit my hand a little bit also, like my fingertip, and it caromed.”