Nearly 130,000 Unaccompanied Migrant Children Entered The US Shelter System In 2022, A Record 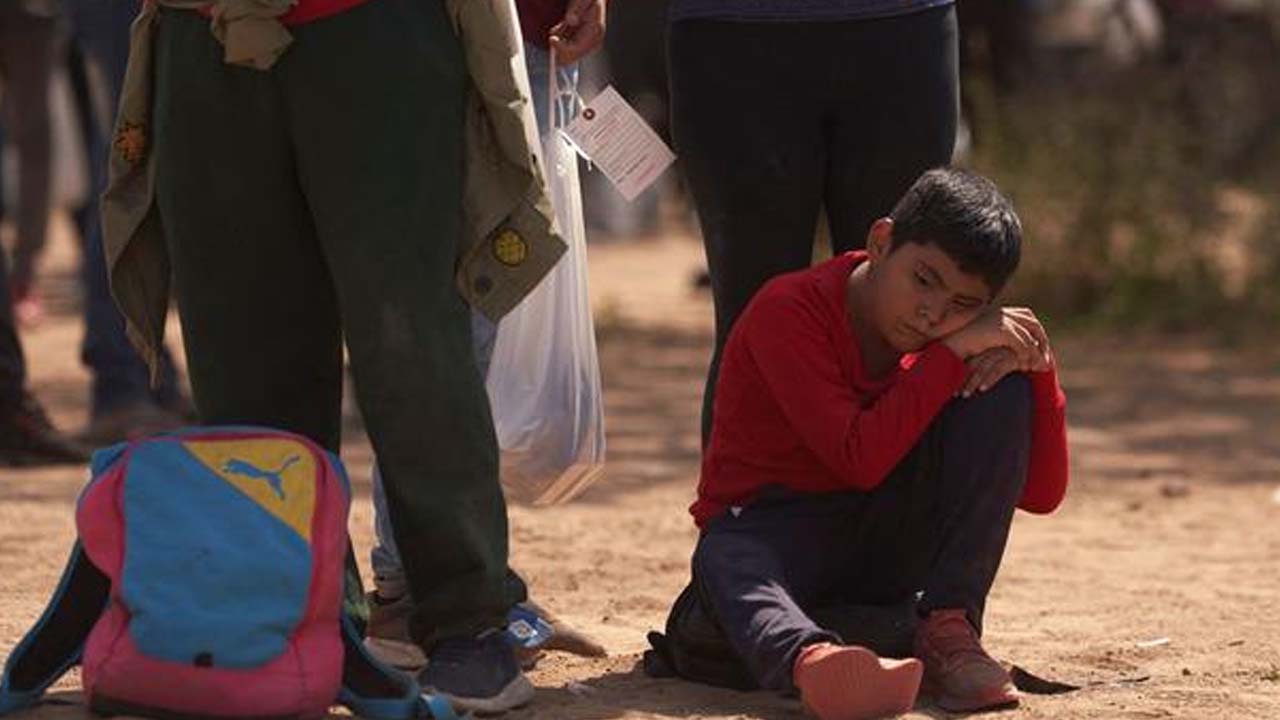 The tally surpassed the 122,000 unaccompanied minors that federal shelters received in fiscal year 2021, when the Biden administration found itself unprepared for a sudden, sharp increase in child migration that led to severe overcrowding in border facilities, the Department of Health and Human Services (HHS) data show.

It also eclipsed the number of migrant children transferred to HHS in 2014 and 2019, when the Obama and Trump administrations struggled to process what at the time were historic numbers of unaccompanied minors entering U.S. border custody.

Under law, HHS' Office of Refugee Resettlement is charged with housing unaccompanied children who lack a legal immigration status until they turn 18 or can be released to a sponsor, who is typically a parent or another close relative living in the U.S. Historically, the vast majority of minors received by the agency are migrant teenagers who crossed the U.S.-Mexico border without their parents or legal guardians.

The record number of unaccompanied minors processed by federal immigration officials over the past 12 months is part of a broader, unprecedented influx of migrants along the southern border that has created dire humanitarian, operational and political challenges for President Biden's administration.

Federal officials along the U.S.-Mexico border processed migrants over 2 million times in fiscal year 2022, the highest level recorded by U.S. Customs and Border Protection. Roughly a quarter of all migrant apprehensions involved repeat crossings by the same individuals, the CBP data shows.

Like the broader recent increase in illegal migration, the record arrivals of unaccompanied children along the southern border can be partly attributed to poverty, domestic and gang violence and other deteriorating conditions in Central America, where the vast majority of these minors hail from, migration analysts said.

A desire to reunite with family members in the U.S. has for years been a major factor driving child migration to the southern border. According to government estimates, approximately 80% of the Central American unaccompanied children who enter federal custody have relatives in the U.S. who can sponsor them.

Migrant smugglers in the region and migrants who successfully enter the U.S. have also relayed to Central American families and teenagers in poor and working-class communities that unaccompanied minors are virtually guaranteed an opportunity to stay in the U.S. after crossing the southern border.

"Absent policy changes, we're likely to see a large number of unaccompanied minors for the foreseeable future," said Andrew Selee, president of the Migration Policy Institute, a non-partisan think tank. "Given the conditions in Central America, it makes sense for young people to try and make it to the U.S. to help their families or for families that are already here to bring their children."

While U.S. border officials have several legal authorities to quickly deport adults — and even families traveling with children — who enter the country unlawfully, a Bush-era law designed to protect minors from trafficking bars the quick deportation of unaccompanied youth who are not from Mexico. It also requires they be transferred to HHS while their immigration court cases are reviewed, a process that typically takes years to complete.

Some migrant children in U.S. custody arrived at the southern border with non-parental relatives, such as adult siblings, aunts or uncles, rendering them unaccompanied children under U.S. law. Others traveled to the U.S. with parents, but were separated from them for different reasons, including concerns they would be sent back to Mexico if they crossed together.

Francisco, 15, Carlos, 13, and Diego, 4, spent several months in HHS custody this year after crossing the U.S.-Mexico border late last year. It wasn't until last month that the three brothers from Honduras were released to their mother in New York City, government documents reviewed by CBS News show.

Doris, their mother, said she fled Honduras with her children after receiving death threats from her eldest daughter's estranged and abusive husband. She said they journeyed north together, but became separated in northern Mexico after being chased by Mexican officials.

"I told them, 'run forward,'" Doris recounted in Spanish, saying Mexican officials tried to prevent her family from crossing into the U.S. "It was very difficult for me to be separated from my children."

Francisco said he helped his younger brothers cross into the U.S., where Border Patrol processed the siblings as unaccompanied minors before transferring them to HHS, which placed them in shelters in Florida and New York. CBS News is not disclosing their surnames because they are minors.

When they swam across the Rio Grande, it was Francisco's responsibility to care for Diego, the youngest brother. "I was not thinking about myself. I was thinking about the kid, because he did not have a jacket and it was at night," Francisco said in Spanish.

Doris, meanwhile, said she tried to cross into the U.S. multiple times to reunite with her sons, but was repeatedly expelled to Mexico. She said she felt "dead" while waiting months in Mexico without her children.

It wasn't until this June that Doris said she was granted a humanitarian exemption to Title 42 and allowed to enter the U.S. after connecting with Each Step Home, a U.S.-based group that helps migrant children in U.S. custody reunite with their families.

But even after Doris entered the U.S., it took months for HHS to release her children because she was living in a shelter for homeless adults and did not have a permanent address. "I almost had a heart attack," she said, describing the moment she reunited with her sons last month.

The family is now living in a room inside a Brooklyn shelter housing other migrant families. Despite the small living space, Doris said her sons are happy to be with her. She was able to enroll Francisco and Carlos in a local public school, where they are learning English.

"I want to study and be able to work one day," Francisco said.

But Doris said it's been difficult to find a job, since she does not have a work permit. Her hearing in immigration court, where she can ask for asylum to try to block her deportation, is scheduled for March 2023.

In a statement to CBS News, the Office of Refugee Resettlement confirmed it received a record number of unaccompanied children in fiscal year 2022. The agency said it was working to set up new shelters and add beds at 220 existing housing facilities to accommodate additional border arrivals of migrant children.

"ORR continues to build capacity that enhances our ability to accept referrals from the Department of Homeland Security in a timely manner by expanding bed capacity, minimizing the amount of time children stay in congregate care settings, and safely placing children with vetted sponsors," the agency added.

While the number of unaccompanied children received by HHS in fiscal year 2022 reached an all-time high, the Biden administration did not face the same level of operational and humanitarian setbacks processing these minors as last year.

In the spring of 2021, thousands of unaccompanied children became stranded in overcrowded Border Patrol tents and detention facilities because HHS did not have enough bed space in its shelter system to house them.

To reduce overcrowding at border facilities, HHS set up more than a dozen makeshift shelters at military sites, convention centers and work camps. While conditions varied across the emergency facilities, children housed at some of the sites reported substandard services, as well as mental health concerns and prolonged stays.

Over the past year, however, HHS closed most of its emergency sites and improved conditions at the ones that remain operational. It also dramatically expedited releases of children to sponsors, including by eliminating some steps in the sponsorship process and hiring additional case managers to place minors with sponsors.

Migrant children are currently spending an average of 29 days in HHS care, down from 37 days in fiscal year 2021, federal statistics show.

Nearly 130,000 Unaccompanied Migrant Children Entered The US Shelter System In 2022, A Record