US Sees Surge In Migrants From Cuba, Venezuela & Nicaragua 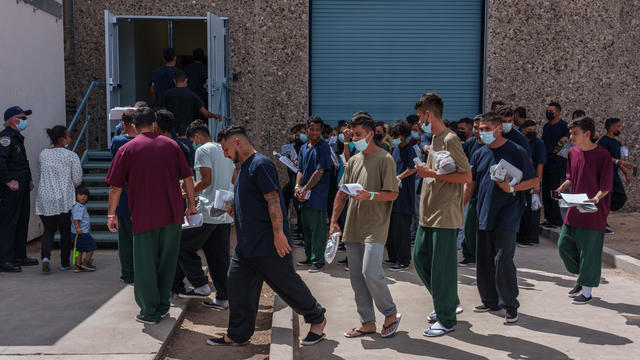 Historically, citizens of Guatemala, Honduras and El Salvador, collectively known as Central America's Northern Triangle, have made up the bulk of migrants processed along the U.S. southern border, alongside Mexican migrants. But that trend was upended over the past year with the arrival of record numbers of people from Cuba, Venezuela, Nicaragua and other countries, including Colombia and Haiti.

The seismic demographic change has posed significant operational challenges for the Biden administration. On one hand, the authoritarian regimes in Cuba, Venezuela, Nicaragua have severely limited or rejected U.S. deportations of their citizens, while Mexican officials have generally refused to accept the return of migrants who are not from Mexico or the Northern Triangle.

In fiscal year 2022, U.S. border officials said there were 220,908 encounters with Cubans, 187,716 with Venezuelans and 163,876 with Nicaraguans, the vast majority of whom were allowed to seek asylum. Migrants from Guatemala, Honduras and El Salvador were processed 541,618 times.

The record arrivals of Cubans, Venezuelans and Nicaraguans were partly responsible for pushing the overall number of migrant encounters along the southern border to nearly 2.4 million in fiscal year 2022, an all-time high that exceeded the record set in 2021, CBP figures show.

Overall illegal border entries, which include the known and estimated number of migrants who illegally enter the U.S. while evading apprehension, were higher in the early 2000s, when Border Patrol had fewer resources and manpower to apprehend border-crossers, government statistics show.

In a statement Friday, CBP Commissioner Chris Magnus blamed the "failing regimes in Venezuela, Cuba, and Nicaragua" for triggering a "new wave of migration across the Western Hemisphere."

In Cuba, discontent with the communist regime in Havana and economic woes have fueled an exodus of tens of thousands of Cubans hoping to reach the U.S., a journey made somewhat easier by Nicaragua's policy of allowing them to travel there without visas. Nicaraguans have left their homeland for similar reasons, citing lack of economic opportunities and opposition to Daniel Ortega's repressive government.

The political turmoil and economic collapse in Venezuela, meanwhile, has prompted 7 million Venezuelans to leave the country as part of the largest displacement crisis in the history of the Americas, according to the United Nations.

Migration analysts said the unprecedented migrant arrivals from Cuba, Venezuela and Nicargua have also been driven by labor demands in the U.S., as well as the knowledge that the U.S. has a difficult time deporting migrants from these countries.

While a monthly record of 33,804 Venezuleans entered U.S. border custody in September, U.S. officials have recorded a sharp decline in illegal crossings by migrants from Venezuela since the Biden administration announced a new deterrence effort earlier this month.

Last week, the Biden administration announced it would start using Title 42 to expel Venezuelan migrants to Mexico under an agreement with Mexican officials. It also unveiled a limited legal pathway for up to 24,000 Venezuelans to come to U.S. airports if they have U.S.-based financial sponsors willing to assist them.

An average of 154 Venezuelans have been entering U.S. border custody daily this week, an 86% drop from 1,131 the week before the U.S. unveiled the new policies for Venezuelans, according to government data provided by administration officials on Friday.

The officials said they've also recorded an 80% drop in migrants crossing Panama's Darién Gap, a roadless jungle that tens of thousands of Venezuelans have traversed this year en route to the U.S.

One official said the U.S. has received reports from Mexico and countries in Central America that Venezuelan migrants are "rethinking their plan to come to the U.S. and either stopping and finding safer places where they can wait to apply for this lawful process or in some cases, voluntarily returning back to where they came."

The Biden administration has not yet announced efforts to expel Cuban or Nicaraguan migrants to Mexico or to offer them the legal pathway that some Venezuelans have been offered. But administration officials have said they may consider expanding the private sponsorship process created for Venezuelans.

US Sees Surge In Migrants From Cuba, Venezuela & Nicaragua