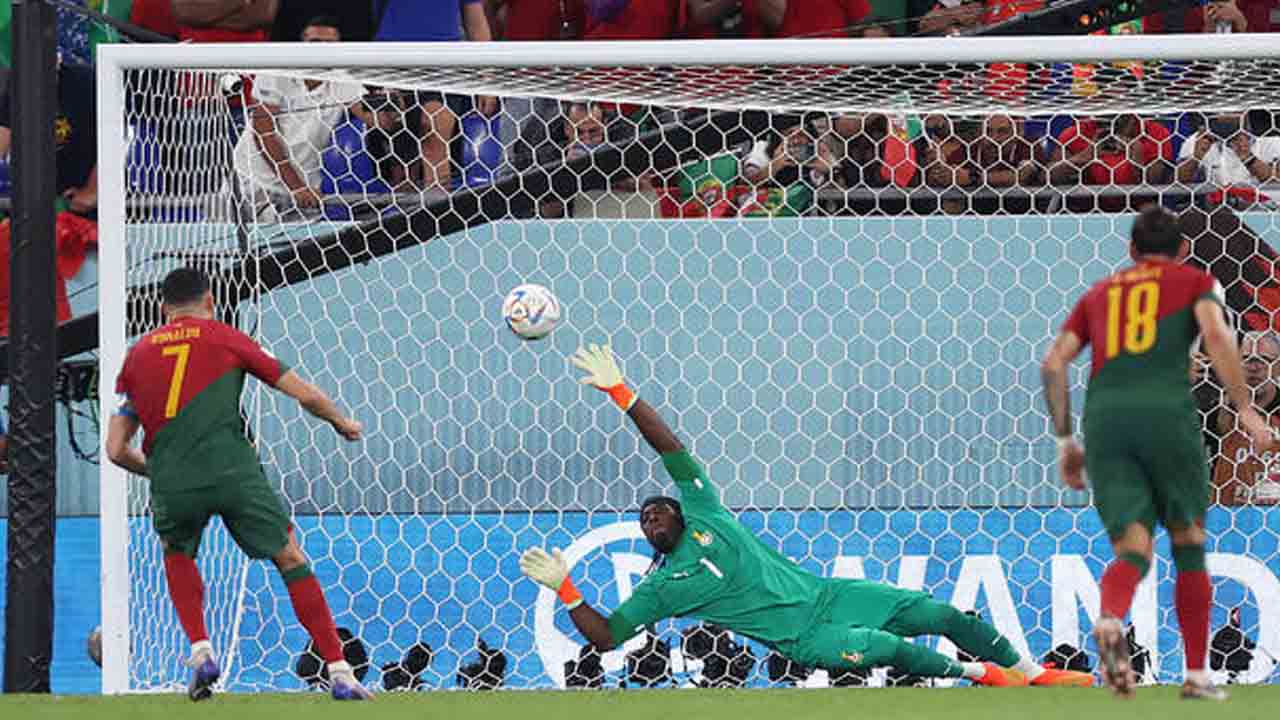 Cristiano Ronaldo closed his eyes, took in a deep breath and then made World Cup history.

The Portugal striker became the first male player to score at five World Cups with his 65th-minute penalty in a 3-2 win over Ghana on Thursday.

Days after his contract was terminated at Manchester United following a tell-all interview, he let his soccer do the talking at the start of likely his final World Cup.

"This was a beautiful moment," Ronaldo said. "The world record, the only player to score in five World Cups, makes me very proud."

Wheeling away after the ball struck the back of the net to give Portugal a 1-0 lead, a smiling Ronaldo performed his usual leap and swivel in the air — the crowd roared his trademark "SI-UUU" as he did the pirouette — before getting mobbed by teammates.

He has now scored in every World Cup since his first in 2006, when a penalty against Iran started his run of goals in the tournament that's now up to eight in 18 matches. He has a men's record 118 international goals.

"I think Cristiano is a phenomenon, a legend," Portugal coach Fernando Santos said. "In 50 years, we will continue to talk about him."

His latest scoring record adds to the luster of a resume that should ensure Ronaldo receives plenty of offers from new clubs after splitting with United on Tuesday. That came after he gave an unauthorized interview to Piers Morgan criticizing the manager, owners and his teammates at the English club.

His fraught buildup to the tournament didn't appear to affect Ronaldo against Ghana, even though he wasted two clear-cut chances in the first half.

"It was a week that finished this chapter (with United)," Ronaldo said. "It is closed and now I want to start with the good foot forward. We started, we won, I want to help my team and all the rest does not matter."

Ronaldo ended the match with his head in his hands in pure relief after Ghana almost snatched a draw in the ninth minute of stoppage time thanks to a piece of ingenuity.

In the last action of the game, Ghana striker Inaki Williams hid behind Diogo Costa as the Portugal goalkeeper rolled the ball on the ground and prepared to clear it. Williams dispossessed Costa and, despite slipping, managed to poke the ball toward goal.

Portugal defender Danilo raced back and cleared the ball away from near the line as Ronaldo, who was sitting in the dugout after being substituted, watched in disbelief.

All the goals came in a wild final half-hour, with Andre Ayew equalizing for Ghana eight minutes after Ronaldo converted his penalty after tumbling under a challenge by Mohammed Salisu.

Ghana coach Otto Addo called the penalty "a special gift from the referee."

Joao Felix regained the lead for Portugal in the 78th minute following a through-ball by Bruno Fernandes, who then set up Rafael Leao to add a third. Osman Bukari reduced Ghana's deficit in the 89th, celebrating in comical fashion by performing Ronaldo's "SI-UUU" twirl.

None of the five African teams at the World Cup won their first match in the group stage. Ghana lost, like Senegal and Cameroon, while Tunisia and Morocco drew their games. "They didn't win but I saw they can compete with the opponent," Addo said. "I hope we can improve."

Inaki Williams made his first competitive start for Ghana, a day after his brother, Nico, came on as a substitute for Spain in a 7-0 win over Costa Rica. Inaki Williams switched allegiance this year from Spain to Ghana, which is the country where his parents were born and left decades ago while his mother was pregnant with him.