All Roadways Into Braggs Cut Off By Flood Water All Roadways Into Braggs Cutoff By Flood Water 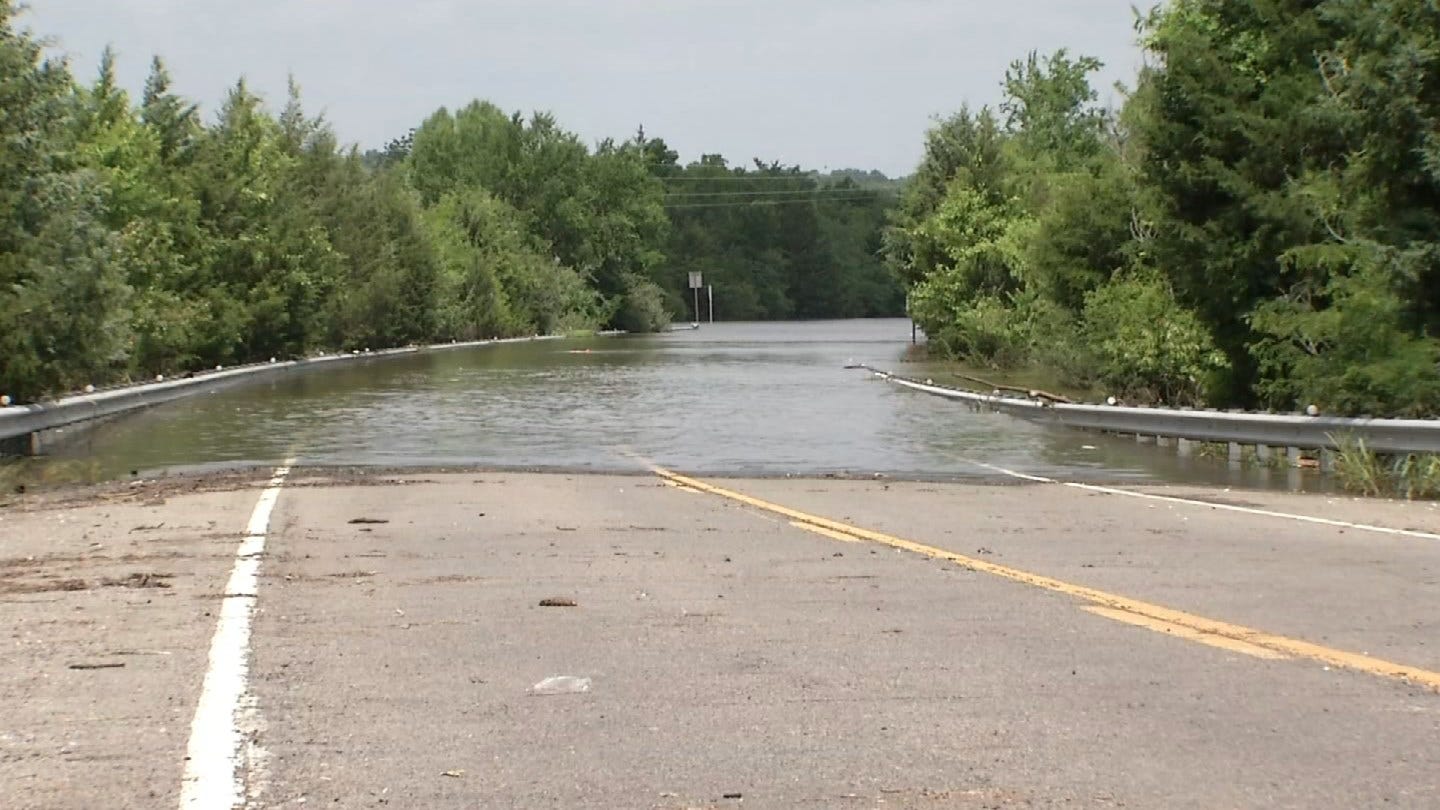 Muskogee County continues to be one of the areas hardest hit by flooding.

Because the Arkansas River and the Verdigris River converge North of Muskogee, the towns south of it are being inundated with water, and some towns, like Braggs, are completely cut off from civilization.

All of the roadways in and out of Braggs in Muskogee County have been completely flooded, and right now the only way the 300 people living in Braggs can get in and out of town is by boat.

“There’s usually a boat ramp right here,” said Dylan Coleman as he was driving the boat across the flooded lake at Green Lead State Park to get supplies into town.

They are also using the boats to get people, like Helen Brassfield, back home.

“People up there will let you park in their driveways because it’s safer to leave your cars there,” said Brassfield.

Helen Brassfield and her husband just got back from their grandson’s graduation in Lawton and their only way to get home is by boat.

“We were gone for about a week and we are very ready to get home,” said Brassfield.

Only two homes in Braggs have been impacted by the flooding. Luckily everyone was able to get out okay. But the roadways are a different story.

Right now every road in and out of Braggs is completely flooded. There is one road near Camp Gruber that county officials can use to get in and out but it’s not open to the public.

Muskogee County Officials created a makeshift dirt road to get in and out but they say it’s not stable enough for the public to drive on.

Right now the National Guard and ODOT are working to make it more stable in hopes that the public will be able to eventually use it, but they say their timeline for completion depends on how much rain we get in the coming days.

But having no way in or out is forcing citizens to work together to get people what they need.

“All the citizens have been here to help each other out. That’s how Braggs takes care of each other,“ said Braggs Mayor Eric Hutchins.

The fire department is filled with different food, cases of water, diapers and different supplies like shampoo and body wash — all donated by people in nearby communities, like Fort Gibson.

“You usually go to Walmart and get what you need for a week two weeks, nobody thinks about it,” said Hutchins.

Right now the VFW is supplying one meal a day to all residents in Braggs.

The town’s only grocery store and the gas station ran out of gas on Sunday because so people were coming to get fuel for their generators because the town was without power. Power is mostly restored to the people living there.

Luckily on Tuesday county officials were able to help him get a fuel truck through a makeshift road near Camp Gruber, so people in town could fill up.

Store owner, Tim Cook, says he must go by boat to restock his store with groceries and everyday items. And because everyone living in Braggs is cut off most of them haven’t been able to get to work.

“We’ve been trapped in since Thursday,” said Gary Nichols.

“I’m thinking about taking a boat to get to work as long as I can find someone to pick me up on the other side to go to work,” said Carrie Ross.

Muskogee County Sheriff’s Office says they are currently working together to try to find a way to get a bus in to take people in and out for work. They are hoping to post a shuttle schedule on their Facebook page soon, but they say it depends on how much rain accumulates in the coming days.

If you want to help, donations are still needed in Muskogee County especially for areas east of the Arkansas River.

There are three primary distribution centers in the county then using boats, trains, planes, and cars to get those donations out. They are having trouble getting supplies to the east side of the river, so they are begging people living on the eastern side to donate supplies if they can.

They especially need non-perishable food items. The donation center on the East side of the river is at Fort Gibson High School in the Old Gymnasium.

All Roadways Into Braggs Cut Off By Flood Water