Back to Hot & Humid, Also Rain Chances Later in the Week. 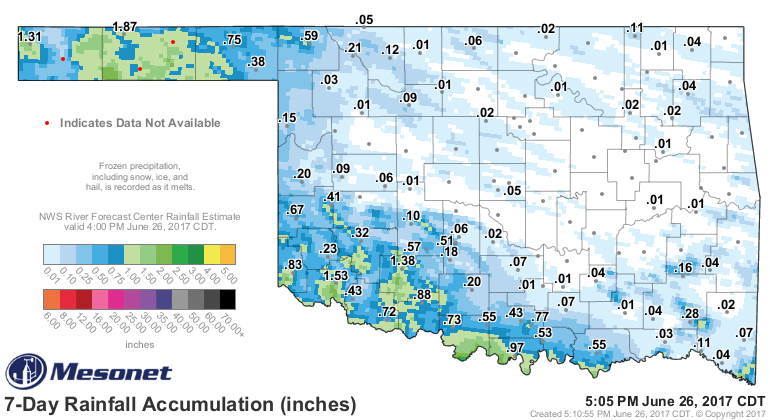 The mostly sunny to partly cloudy skies of recent days have masked to a certain extent the below normal temperatures that we have enjoyed.  I say that because the temperature is measured in the shade, not by exposing a thermometer to direct sunlight which would then only measure how hot the sun was heating the thermometer, not the air temperature.  Keep in mind exposure to direct sunlight makes an individual feel like they are 10-15 degrees hotter than what the actual air temperature is showing.  So, those 80s we had over the weekend together with relative humidity levels in the lower 30% range were actually rather pleasant for this time of year.  That was the case again today as you can see on the max/min chart across the state, courtesy of the OK Mesonet.  For Tulsa, the urban heat island brought our max/min to 89/66 as compared to the normal values of 90/70, but those lower humidity levels certainly helped.

Unfortunately, these lower humidity levels are also representative of a very dry atmosphere over us and we do need rain.  Notice it has been more than a week for most locations since any decent showers have occurred and for many locations it has been much longer than that.  Couple that with the low humidity levels which in turn lead to evaporation rates in excess of ¼” daily and it is no wonder that many locations are getting quite dry and in need of a good rain.

There is a chance tonight for a few overnight showers and perhaps a storm or two, primarily for the more northern counties.  There is a boundary in KS and with a weak NW flow pattern aloft, there is the possibility that a few of the showers/storms that are forming up there could make it down this way before the night is over.  Otherwise, with a light SE breeze, look for temperatures to drop into the mid-upper 60s to start the day Tuesday.  Dew point temperatures are still in the 50s as of late this afternoon and the light SE breeze will only slowly bring those dew points up.

By Tuesday afternoon, we should have more sun than clouds and the dew point still looks to be below 70 and the afternoon high near 90.  So, one more decent day before the heat and humidity really build back in. That will be the case for Wed/Thu as hot & humid conditions return along with gusty southerly winds at least providing some good ventilation.  Still not much in the way of rain but that will be changing on Friday as you can see on our forecast page.

The longer range data is coming into better agreement on a brief pattern change aloft which will allow a weak surface boundary to move into the area and stall out during the Fri/Sat time frame.  That will result in more cloud cover and a better chance of showers/storms, some of which could be locally quite heavy.  Notice the 7 day QPF is quite optimistic regarding the potential for some significant rainfall.  Quite frankly, those numbers seem on the high side, but at least there is the potential for some decent rainfall for most, if not all of the area.

That activity may linger into Sunday, but after that the guidance suggests ridging aloft building over the state which would suppress any additional shower chances and also bring the hottest weather so far this summer just in time for July 4th.

Looking further ahead, the 8-14 day outlook also suggests above normal temperatures along with a near normal pattern of scattered showers/storms.  By then, our normal daytime highs are in the low 90s and storms are at best on a scattered basis.

Back to Hot & Humid, Also Rain Chances Later in the Week.