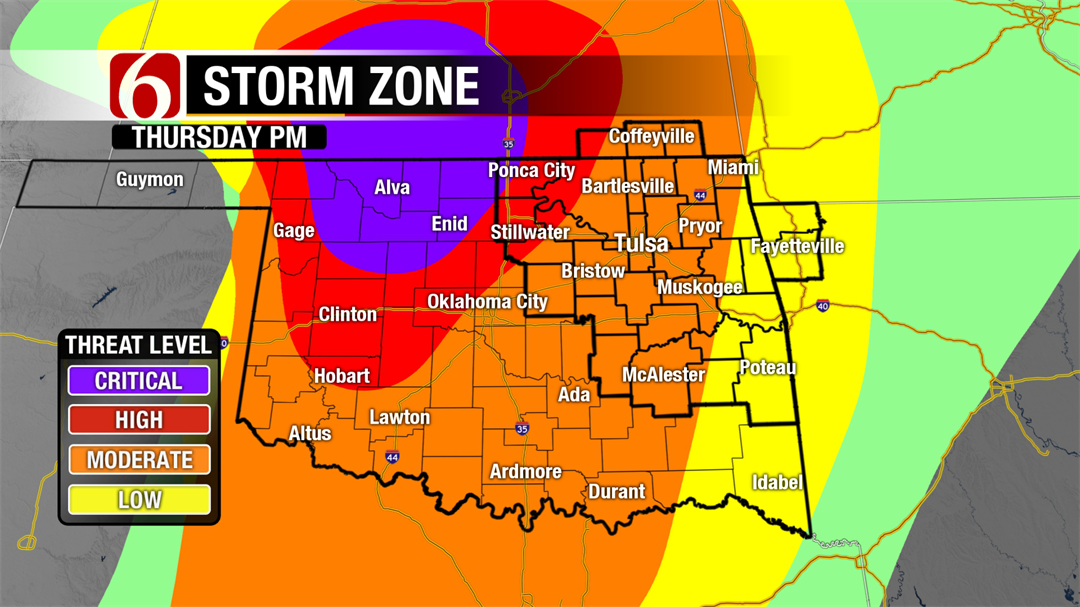 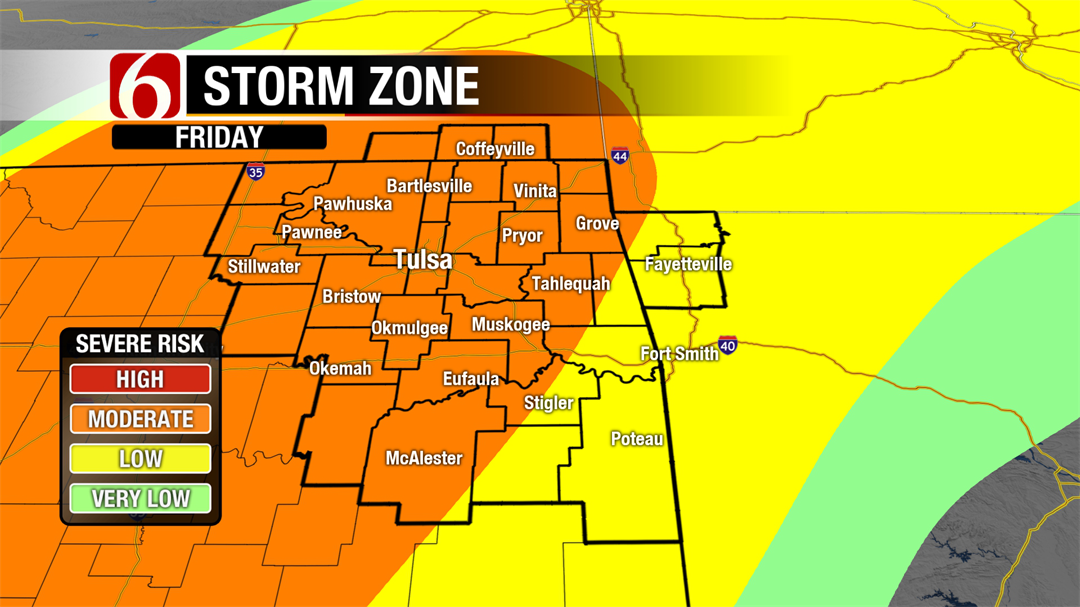 Strongly advise being very weather aware for tonight through Friday night as there will be several rounds of storms, some of which will be severe along with a threat of flooding rainfall.  Severe storms with tornadoes are ongoing as I write in W OK and as you can see on the storm zone map, the greatest risk is to our W and NW.  Even so, the storms out west will eventually move this way during the overnight hours and although the storms will be weakening somewhat, they will still pose a damaging wind and hail threat and there may even be an isolated tornado or two.

That activity will move on eastward by early morning with a chance of some lingering showers through the morning and some storms may reform by early afternoon.  The main show still looks to take place Friday night when a line of storms in advance of a cool front will move through and will again bring a threat of damaging wind/hail and perhaps a tornado or two. Notice the storm zone for Friday has been upgraded and is now an enhanced risk.  However, it is a very complicated scenario through Friday night as the storms overnight tonight and into the day Friday will leave behind some boundaries that cannot be resolved more than a few hours in advance and will have an impact on subsequent storm formation and intensity.  Also, the mostly cloudy skies Friday may limit the instability somewhat as temperatures should be near the 80 degree mark during the afternoon after reaching the upper 80s today.

Notice the 2 day QPF, valid through Saturday, also suggests the potential for locally heavy rainfall and a flash flood watch is in effect through Saturday morning.  In addition, that amount of rainfall will keep our rivers and lakes quite high going into Memorial Day weekend.

As for this coming weekend, any lingering showers or isolated storms will be ending Saturday morning and primarily confined to the more S/SE counties.  Brisk northerly winds will make for a much cooler day though with temperatures only reaching the lower 70s Saturday afternoon.  If our skies should clear more quickly than now anticipated, we may be a little warmer that afternoon, but those clearing skies will also result in a cool start to Sunday morning.

Lots of sunshine for Sunday and light winds will make for a pretty nice day as you can see on our forecast page and below normal temperatures will continue into early next week.  Another cool front will be arriving by early Tuesday so there will be another chance of showers/storms for late Monday into Tuesday morning followed by another cool down through the middle of next week.

Bottom line is the significant potential for severe storms tonight, Friday, and Friday night along with the possibility of flash flooding.  So, stay tuned and check back for updates.