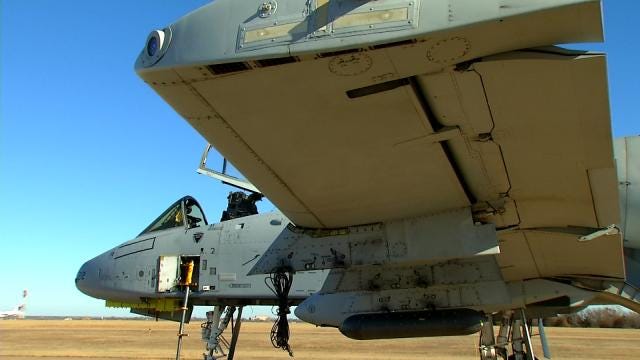 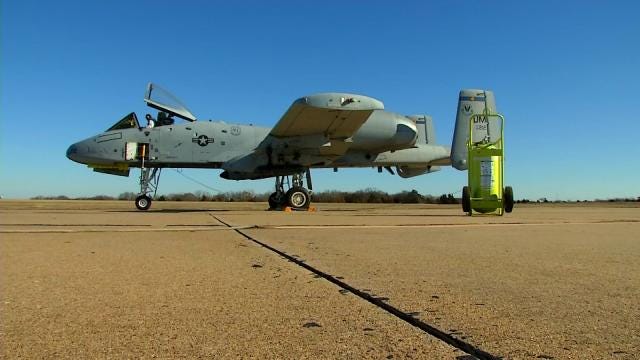 The A-10 attack jet that will soon be patrolling Oklahoma's skies in search of thunderstorms served more than 30 years of active duty with the U.S. Air Force.

The U.S. Air Force assigned it to the 74th Tactical Fighter Squadron of the 23rd Tactical Fighter Wing based at the former England Air Force Base in central Louisiana. Known as the Flying Tigers, the squadron painted the letters “EL” on the tails of all its A-10s.

The Flying Tigers were sent to King Fahd Airport in Saudi Arabia during the Gulf War, where they flew missions in Iraq during Operation Desert Storm in 1991.

With the closure of England Air Force Base in the early 90s, A-10 number 80-0212 was assigned to the 354th Fighter Squadron, the Bulldogs, based at Davis-Monthan Air Force Base near Tucson, Arizona. The Bulldogs painted the letters “DM” on the tails of their A-10s.

There is evidence the jet was sent to Iraq again, this time for the invasion in 2003.

After returning to Davis-Monthan, #212 was upgraded to an A-10C model, which means it received an improved fire control system and electronic countermeasures as well as the ability to target smart bombs.

Number 80-0212 was then deployed to Afghanistan. Once it returned to Davis-Monthan AFB, it was turned over to the National Science Foundation to become the Weather Warthog. An active duty U.S. Air Force pilot flew it from Tucson to Guthrie for its new mission.

One of the biggest changes for number 80-0212 is the removal of its primary weapon, the 7-barrel GAU-8 Avenger cannon. a Gatling-type gun that shoots 30 millimeter shells. The designers started with the gun, which is almost 20 feet long and weighs more than 600 pounds, and designed the airplane around it.

An Air Force crew "demilitarized" the plane once it arrived in Guthrie, which included removing the gun. The scientists plan to replace it with a separate electrical system to power all the instruments being added to the Warthog to study thunderstorms and other dangerous weather.

The Warthog still wears the number "212" on its nose, its serial number and official name tag in the Air Force.