Frosty Start to the Weekend, Showers to End It. 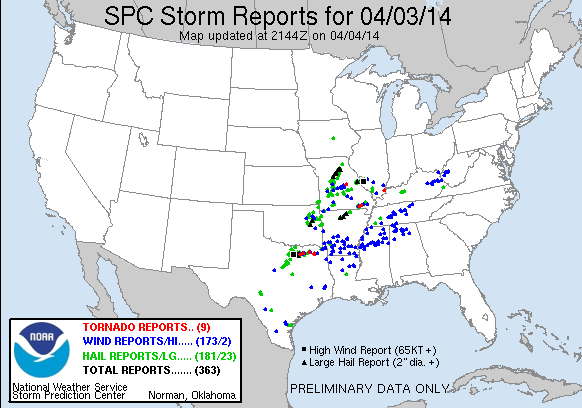 The last couple of days have been a little crazy but at least things have settled down just in time for the weekend. The map on the right has many of the severe weather occurrences from yesterday and fortunately for us all the tornadoes were somewhere else. Hail was the primary problem along with some damaging wind reports and there are photos on the share page of the some of the larger hail.

Despite sunny skies, brisk northerly winds have kept us much cooler today as you can see from the second map on the right, courtesy of the OK Mesonet. Daytime highs have been 20 degrees or more below those observed just yesterday. The cool high pressure system will be settling over us tonight and then quickly moving on eastward. As a result, our winds will be much lighter for the overnight hours and returning to a more E or even SE direction by morning. With only a few high clouds expected tonight, that combination should result in temperatures in the low-mid 30s to start the day Saturday which in turn means there will be the potential for frost, particularly in the cooler outlying valleys.

Clouds will be on the increase Saturday morning with mostly cloudy skies by afternoon and overcast skies then extending through the day Sunday. This is due to another storm system coming our way, but most of the energy from that will be focused further south. Even so, there will be some scattered mostly light showers or occasional periods of rain, more likely for the more southern counties during the day Sunday. A few rumbles of thunder may also occur, but nothing severe is anticipated. However, the cloudy skies and showers together with an easterly wind component will lead to a very cool day with daytime highs only expected to be in the 50s after starting off in the 40s that morning.

Monday will also have a chance of showers which together with brisk northerly winds will make for another very cool day with afternoon highs only around 60, if that. Any lingering showers are expected to come to an end by Tuesday morning followed by clearing skies. That will be followed by a warming trend as we head into the latter part of the week and our winds return to a southerly direction. Lots of sunshine will also help push daytime highs into the 70s by Wednesday and back to near 80 by Thursday and perhaps Friday as well. A weak front may approach on Friday but right now it looks to wash out first. That should result in several days of southerly winds going into next weekend which may well prime things for our next round of stormy, spring-like weather.

Frosty Start to the Weekend, Showers to End It.