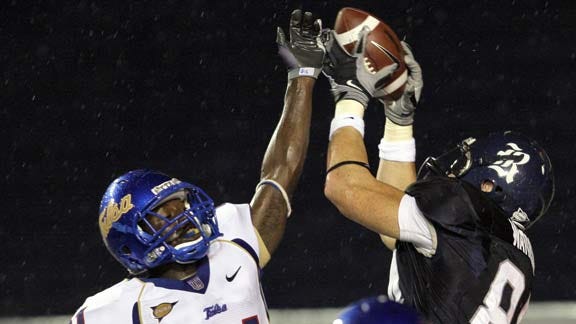 Week eight of the 2012 college football season has arrived, and it's homecoming for the Golden Hurricane. Tulsa comes in riding a six-game winning streak and is 4-0 in conference play.

Rice has had a shaky season so far, defeating Kansas and previously unbeaten UTSA, but still remains winless in conference play. Losses to the likes of Houston and Marshall are respectable, but a loss at Memphis is flat-out bad.

The Owls' defense has been their biggest problem this season, giving up 35 points per game, ranking No. 105 nationally. That number was at 44 points per game through Rice's first five games, but the Owls defense has limited its opponents to just 14 points in each of the past two contests. It's hard to know whether that improvement is a product of actually getting better, or just playing two poor teams; I guess we'll find out Saturday.

The good news for Rice is its offense has played fairly well this season, at least attempting to pick up the slack for the defense. The Owls put up 37 points on Louisiana Tech, 25 on the road at Kansas and 51 against Marshall. They certainly have the potential to explode and should provide a decent test for the Hurricane defense.

TU comes into this one riding high, sitting alone atop Conference USA. With Houston's Thursday night loss, Tulsa is the only team in the division without a conference defeat. TU has a bye week next week, then a date with the Arkansas Razorbacks, but if they want any of that to be exciting, they must find a way to keep the focus on Rice.

TU's top receiving option, Keyarris Garrett, has been ruled out of this contest due to medical reasons, and quarterback Cody Green's shoulder appears to be bothering him. Coach Bill Blankenship says Green will be a "game-time decision." If Green can't go, sophomore Kalen Henderson will get the call. Henderson has very little experience, and outside of his mop-up duty against Nicholls State, he is 1-7 passing this season. In other words, whether Green starts or not, expect Tulsa to run the ball an enormous number of times. If Alex Singleton can find the end zone, he will be all alone in first place on the school's all-time rushing touchdown list. That would certainly be a treat for the homecoming crowd.

Tulsa has won five straight against Rice since its 2006 overtime loss. It's hard to picture TU losing a homecoming game to an inferior Rice squad when the Hurricane still has so much to play for this season.

Although Rice might not be a marquee opponent, this is a huge game for TU. The Hurricane has done a great job this season of taking care of business without any slipups. Tulsa already has a one-game lead over SMU and Houston in the C-USA west division, and must keep beating the teams they should beat. If TU can build a lead in the division, it can survive a late-season loss to a quality team such as UCF, Houston or SMU and still take the title.

My only concern here is that if Cody Green doesn't play, Henderson starts and the TU coaches out-think themselves and decide to catch Rice off-guard by passing. There's no doubt the Owls' strategy will be to try and stop the run, but they haven't been good at it all season, and Tulsa has one of the best run-games in the country.

Long shot of all that happening, so I'm picking the Hurricane: 41-20.