Denver's Chris Harris Back Home In Bixby For NFL Training 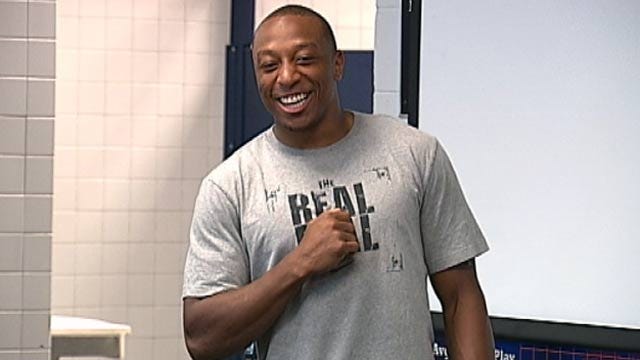 Nowadays, if you're looking for Chris Harris, you can find him right around the corner from his old blue and red locker. He's out running, jumping and sweating under the Bixby sun, pushing himself up and down the stadium stairs.

The past twelve months have been an exciting ride for the Tulsa native. After going undrafted out of college, Harris signed with the Denver Broncos and started four games for the AFC West division champions.

Now, he's back training where it all began. The former Bixby Spartan has finally had a chance to reflect on an awesome rookie year.

"It definitely went better than expected," he said with a huge grin. "The first goal was to start on special teams and make an impact on special teams. That ended up leading me to play on the defense. I knew I could play out there with the defense-- it just takes a little time. You have to work your way up."

Harris played in all 16 games for Denver and recorded his first career interception against the Oakland Raiders in a 38-24, week nine win. In all, he racked up 72 tackles, earning him a spot on Denver's All Rookie Team and winning the Breakout Player of the Year and Overachiever of the Year awards.

The 5-foot-10 cornerback stays in shape by working out at Bixby High School. He also took time to speak to some high school kids this week at a Spartans camp.

"First off I always tell them that education is big. You can't make it here unless you get your education," Harris said. "Next, I tell them to stay committed to their goals. Make a lot of short term goals and continue to persevere and work towards those goals. Try to meet those steps as you try to carry on in your journey."

As if this year hasn't been busy enough, Harris is getting married next weekend to his college girlfriend.

"It's definitely going to help me out as a person," he said. "Being able to have my partner with me for the rest of my life is definitely going to be a great thing. I'm just doing what the Bible says to do. God says you gain favor from being married and it's just another great accomplishment for me."

He laughed when asked about his fiancées coaching prowess.

"She's kind of my off-the-field coach."

Harris is off to Dallas soon to continue training for his second season in the NFL. He says he's excited for the challenge and thinks this year can be better than the last.

"(I want to) come out start all 16 games," he said. "With the great quarterback we have leading our offense (Peyton Manning), our goal is to win a Super Bowl. We won the division last year and we definitely want to win the division this year."