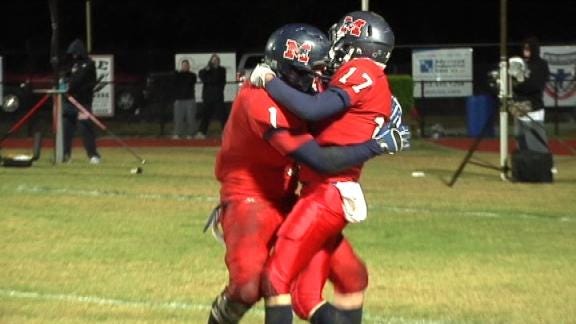 TULSA, Oklahoma – The Metro Christian Patriots avoided a second straight first round upset by scoring 17 unanswered points in the fourth quarter to down Berryhill 17-14 Friday night.

The Patriots trailed at halftime and made two key mistakes in the third quarter that set them back even more. Quarterback Andrew Hearon threw an interception to start the quarter and on their next drive the Patriots fumbled the ball back to the Chiefs.

The Chiefs came up empty on both drives. Berryhill went to the fourth quarter leading 14-0.

Metro Christian finally got on the board in the first drive of the final quarter. Hearon scored on a 1-yard touchdown run to cut the lead to 14-7. They would tie the game and then take the lead on a 24-yard field goal from Ben LaCourse with less than three minutes to play. Hearon completed a fourth down pass to keep that drive afloat.

Berryhill couldn’t move into field goal range on its final drive. After going to the state title game a year ago, the Chiefs ended its season in the first round. They finish the season 5-6.

Metro Christian, who lost on its home field in the first round last season to upstart Dewey, will travel to play Valliant (10-1) in the next round.