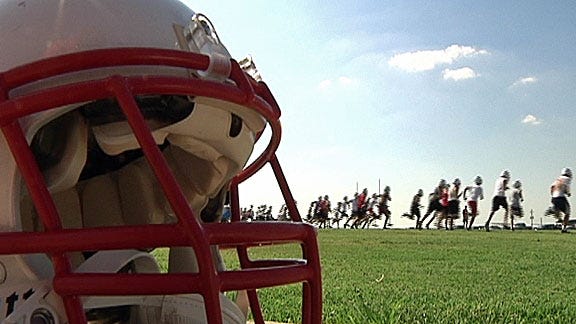 The race for the gold ball in Class C will be quite a fight to the finish.

Although only one team is undefeated on the season so far, five teams have only lost one game, which makes for a tight race with everything at stake.

Deer Creek-Lamont: The Eagles, the only team with a perfect record entering the playoffs, returned 12 starters this year and this coupled with their playoff experience from last year, has increased their confidence entering the run to the playoffs. In their district, they scored a minimum of 46 more points than any other team and on the season, the least amount of points scored in a game is 30. The Eagles have also had five games where they scored 54 or more points. In 2009 Deer-Creek-Lamont beat Shattuck who had won seven straight eight-man state titles before losing in the semifinals.

Forgan: The Bulldogs enter the playoffs with an impressive 9-1, 8-0 record and a district title this year under their belt. After losing in last years semifinals to the eventual runner up, their 13 returning starters and talented underclassmen are ready to roll. In their last three regular season games they outscored their opponents 140-24, including a 45-0 shutout against Goodwell. Look for a good showing on defense by senior linebacker Tyler Eagan and on offense Rhett Radcliff who has 178 carries for 1197 yards.

Maud: The district four champions may have one loss on their season record, but since the week one slip against Bowlegs they have crushed the competition. The Tigers have two shutouts on the season and they trampled their final opponent 60-14. Interestingly enough in district four, Maud actually ranked second in district points with 102 behind Midway’s 103 who came in second in the district due to their 8-2, 7-1 record. Despite the one point advantage, Midway actually lost to Maud by two points in week eight, which is Midway’s only loss in district. Look for good play from senior quarterback Shane Bailey who is a three-year-starter.

Tipton: Another team with only one loss, the Tipton Tigers fought through the season to be district two’s champion. Last season they went 10-1 making it to the quarterfinals where they lost to the eventual state champion, Timberlake. The Tigers have no trouble scoring points. With two shutouts and 30 more district points than any other team, the Tigers must continue their offensive firepower through the first and second round because there is a good chance in round two they could face Covington-Douglas, the only team they have lost to this year.

Shattuck: In the past eight years, this team has won seven titles. They can never be counted out of the gold ball race. Although 2009 was plagued with injuries, their nine returning starters and senior stars have done their part in leading the Indians to 8-1, 7-1 on the season thus far. They know how to score points and on the season they average 44 points per game. Although they lost in week four, they have had five straight wins, including three consecutive shutouts before their final regular season game that they won 58-12 over Waynoka.

Besides the top five there are two other teams to keep an eye on. Both Temple and Covington-Douglas are teams with only one loss and a lot to play for.