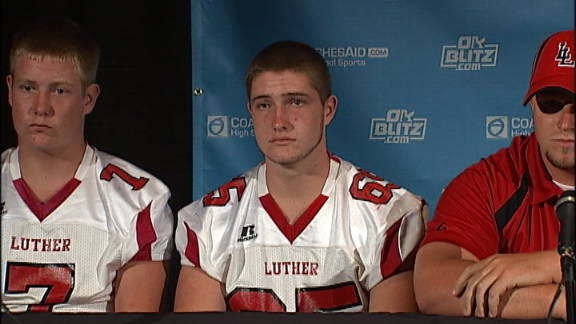 OKLAHOMA CITY-- District and class realignment can lead to easier or more difficult schedules, depending on the team.

The Luther Lions likely fall into the latter category. After participating in Class A last season, the Lions will be tossed into District 2A-2 to compete against the likes of Millwood and Jones.

Like most teams, Luther embraces the challenge. After all, there’s no reason to fret about circumstances out of its control.

Luther made the playoffs a season ago on the wings of a 5-6 record. Many of those players are back and hope to lead the team back to postseason play.

Quarterback Haskell Browning stepped in midseason and impressed at the position. After some time to gel with his teammates, he said the game slowed down for him. After posting 1,051 yards of offense, he’ll hope for the same kind of progress in 2010.

Michael Voss and Austin Weathers are back on defense as part of seven returning starters. Much of the push will come from the front as the emphasis will be forcing the opposing offense into making bad decisions.

“We’re excited about what those guys can do up front,” said Sanders, who admitted the team has shuffled its defensive lineup a bit to find the best fit. “The work that they’ve put in is going to pay dividends for us.”

Mental and physical preparation have been focal points for the Lions. The weight room has been like a second home to the players – a place where they can get ready for the season and the challenges ahead.