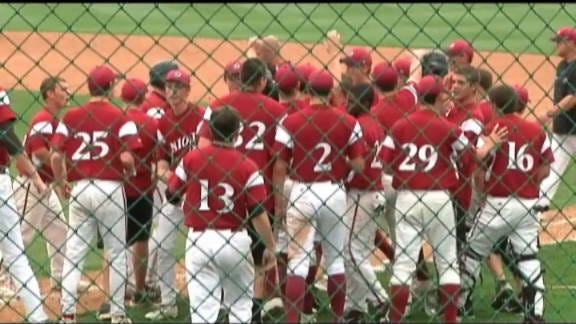 BIXBY, Oklahoma – The Union baseball team mounted a big seventh-inning comeback to force extra innings and came through with a walkoff hit in the eighth to earn an 8-7 victory over Edmond Santa Fe in the first round of the state playoffs Wednesday.

Union trailed by three heading into the bottom of the seventh, but quickly gained momentum with back-to-back singles to start the inning. After a walk loaded the bases with nobody out, starting pitcher Clayton Blackburn was pulled in favor of Ryan Shaw.

Shaw walked the first batter he faced on four pitches, bringing in a free run and keeping the bases loaded. Taylor Alspaugh followed, and after an inside pitch he tried to act like he had been hit. The umpires did not buy it, and Alspaugh eventually struck out for the first out of the inning.

With the bases still loaded, Cole Webb connected on the Redskins’ first clutch hit of the game. He ripped a line drive that missed shortstop Cody Rosecrans’ glove by mere inches, and two runners came around to score and tie the game 7-7.

After a second strikeout by Shaw, Chad Gwinn hit a ground ball to shortstop that should have ended the inning. The throw to the third baseman was low and rolled to the dugout, but the runner at third – who could have scored the game-winning run – did not realize it. He failed to advance on the play, loading the bases with two outs.

Shane Kinnear came up next and worked a full count, making the game come down to one pitch. Shaw gunned a fastball past him for his third strikeout of the inning to send the game into extra innings.

After the Wolves went down in order in the top of the eighth, they made a critical mistake to start the bottom half. Justin Harris hit a ground ball to third base, but Conor Costello threw the ball away and allowed Harris to advance to second.

Santa Fe intentionally walked the next batter to allow a force at any base, and Josh Whisler followed with a ground ball to second base. The Wolves got one out at second, but Whisler outran the throw to first to avoid a double play. That brought Ambrose to the plate with one out, and he ripped a single into left field that brought the game-winning run across the plate.

Union trailed in the bottom of the seventh thanks to a costly mistake in the top of the frame.

After a walk and bunt single put runners on first and second, Jordan Lopez laid down a sacrifice bunt trying to advance the runners. Way’s throw sailed wide of first base, allow two runners to score and Lopez to make his way to third with nobody out.

Lopez scored on a single by the next batter to give the Wolves a three-run lead, their largest of the game. Rosecrans knocked a double off the center-field wall moments later, but an excellent relay throw gunned down a runner at the plate and prevented Santa Fe from extending the lead.

The wild finish came after the starting pitchers were the story at the beginning of the game, both on the mound and at the plate.

The Redskins erupted for four runs in the bottom of the first, thanks in large part to a three-run home run by starting pitcher Cole Webb. Brady Newville cut the lead to 4-1 on an RBI single in the second inning, but Webb and Santa Fe starter Clayton Blackburn both started dominating on the mound. Neither surrendered another run until the fifth inning, when Blackburn helped his own cause at the plate.

A double and two-out walk brought Blackburn to the plate representing the tying run, and he worked a long at-bat that eventually resulted in a full count. On the payoff pitch, he launched a deep fly ball that swirled in the wind and sailed over the wall in left-center field to tie the game and set up the crazy final innings.

Webb and Blackburn both finished without a decision. Cole Way relieved Webb and was credited with the win despite a rough seventh inning. Only one earned run was credited to Ryan Shaw, but it was the game winner that handed him a loss.