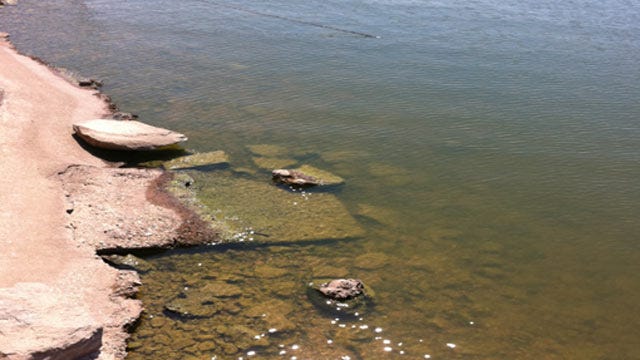 TULSA, Oklahoma -- GRDA's board of directors has wrapped its emergency meeting in Tulsa and has decided to keep Grand Lake open but issue warnings about bodily contact with the water because of the blue green algae.

The GRDA board was told it can expect the conditions to get worse before they get better.

Tests show in some parts of Grand Lake - it's nearly 18 times more toxic than the warning level the World Health Organization uses.

How toxic is that? The algae could kill a dog in less than an hour.

Blue green algae are microscopic organisms that are naturally present in lakes and streams, usually in low numbers. However, the algae can become abundant in shallow, warm water that receives heavy sunlight.

Most blue green algae aren't toxic, but toxins harmful to humans and animals can be produced in some algae blooms, which is the case at Grand Lake.

A GRDA official told the board an algae bloom like this one has never been experienced in the state of Oklahoma and it could pose a significant health and safety issue for the public.

An attorney for the GRDA board recommended not closing the lake.  After the discussing the issue for about an hour and a half, the board decided to warn against swimming in Grand Lake.

But what about Lake Hudson, or Lake Fort Gibson, or the others that feed from Grand Lake?

"I think that's a very good question. As a matter of fact, as soon as we're through, I'm going to go ask that," said Greg Grodhaus, GRDA Board Member.

"I think at this point the warnings are specific to Grand Lake because that's the only area where we've actually seen the outbreak," said Michael Kiefner, GRDA COO.

GRDA is not ready to issue warnings for other Northeastern Oklahoma lakes but does ask people to use common sense if they do see blue-green algae in the water.

The experts also told the GRDA board the next problem will be fish kills when the algae dies.

Those same experts says the only way to kill the algae is to use chemicals, but they are not recommending that course of action because the chemicals cause problems, too.