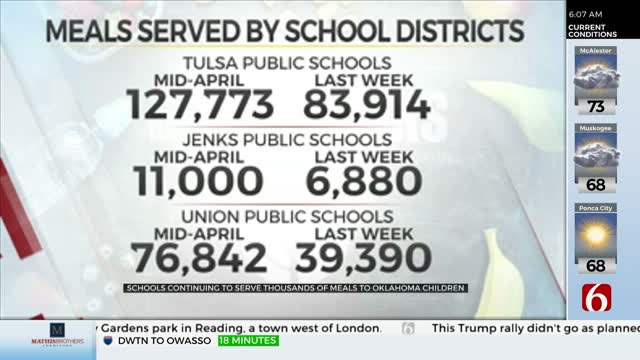 Schools around northeastern Oklahoma are continuing to serve thousands of meals to children even as restrictions are being lifted around the state.

Many schools said they're preparing less meals now then they were during the peak pandemic time, but they said they're still serving more meals than they were last summer.

Tulsa Public Schools said they served almost 84,000 meals last week; and during their peak time in April, they were serving closer to 130,000 meals a week.

In Jenks, they served about 7,000 meals last week compared to nearly 11,000 meals during the months of April and May.

Union has been averaging about 40,000 meals for the past two weeks, and they said that's down from April when they were serving more than 75,000 meals a week.

The school districts said they're preparing a lot less meals now that the numbers have gone down.

However, all three districts said the numbers are up significantly this summer compared to last summer; so, they've noticed there's still a big need for Oklahoma families right now.

Most of the districts also believe the numbers are up this summer because parents became accustomed to coming and picking up meals at the schools during the months of April and May, and they said they're happy to continue serving Oklahoma kids.