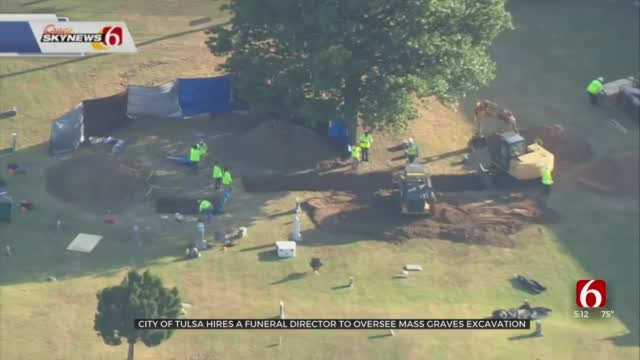 While archaeologists work this summer to study the human remains inside the mass grave at Oaklawn Cemetery, a funeral director will oversee the work.

The state requires a funeral director to be involved in the process, and a man named Tristan Wilson was hired to work at Oaklawn during the excavation. Wilson works for Keith Biglow Funeral Directors Inc., and said he earned his funeral directing license in 2006.

Wilson said when he found out about the mass grave and the possibility of archaeologists doing more work to determine whether the remains are connected to the Tulsa Race Massacre, he was instantly interested in meeting the need.

He said this is more than a job; he feels personally connected to the work.

Wilson said his paternal grandmother, Fannie Wilson, was six years old back in 1921, and survived the Tulsa Race Massacre. He said her parents also survived.

“They hid for several days and you know, just survived,” he said.

Wilson said he is "proud" to be awarded the contract with the city to do the work.

"So it was important to not only myself, but just, I think everyone around us, to kind of be a part of that and be a part of the history coming up, just thought that was special to us,” Wilson said.

The excavation work is expected to start in early June.