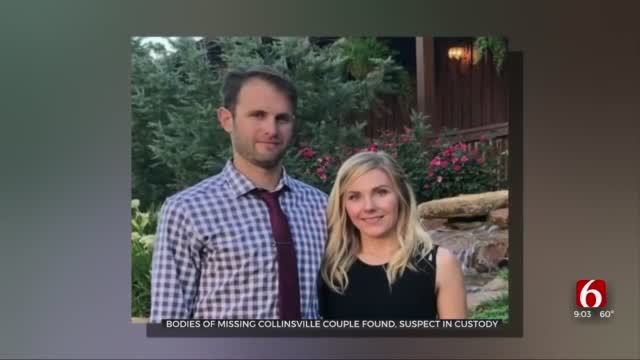 A man is in custody Monday night accused of killing two family members in Washington County.

Deputies said Sheri and Kraig Chambers were found in Washington County Monday afternoon after they were first reported missing on Sunday.

Related Story: TCSO Searching For Person Of Interest In Connection With Couple's Disappearance

Deputies said they were asked to do a welfare check on Sheri and Kraig Saturday afternoon at their home in Collinsville. They said family members were worried because they hadn't heard from the couple.

"We discovered physical evidence that they had possible met with foul play," Casey Smith with the Tulsa County Sheriff's Office said.

Deputies said the last person to have contact with the couple was Kraig's cousin, Pavey. They said Pavey was just released from prison a few months ago.

Deputies said after they took Pavey into custody, he led them to Washington County where he said he took Kraig and Sheri's bodies after shooting them in their home. They said Kraig Chambers' body was found under a bridge near Vera and his wife, Sherri's body was found just down the road.

Deputies said the couple had a young child together.

"This is about as bad an outcome as you could get. We have two family members that are deceased, and another family member who has been arrested in connection with their murder," Smith said. "We have a child without parents. this isn't the way anybody wanted this to end."

Pavey is in the Tulsa County Jail on two complaints of first-degree murder.

The family has set up a GoFundMe to help with funeral expenses and to help Kraig and Sheri's child. You can click here to help.