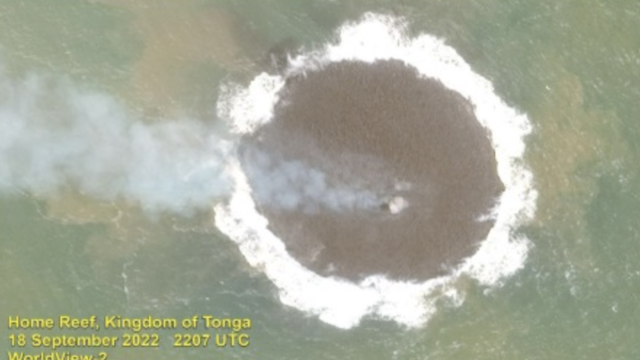 A volcano that erupted in the southwest Pacific Ocean has started to create a new island. On Sept. 10, a volcano erupted on Home Reef, an undersea mountain that is not usually visible. But as the volcano continued to erupt, a new island rose above the surface of the water, NASA's Earth Observatory said.

The seafloor ridge that stretches from New Zealand to Tonga has the highest density of underwater volcanoes in the entire world. About 11 hours after the volcano erupted, as lava continued to ooze out, a new island had formed and by Sept. 14, researchers with Tonga Geological Services, which is a government agency, estimated the area of the island to be 4,000 square meters, or about one acre.

By Sept. 19, the island was 8.6 acres and about 49 feet above sea level, according to Tonga Geological Services. On Sunday, the agency said there had been 24 volcanic events in 48 hours – increasing from 11 on one day to 13 the next.

During volcanic activity, lava and plumes of steam and ash seep out. The water surrounding the reef is also now discolored, which could be caused by the volcanic rock fragments and sulfur from the eruption, NASA says.

The volcanic activity poses low risk to surrounding communities, but boaters are being advised to sail about 2.4 miles away from Home Reef, Tonga Geological Services said. CBS News has reached out to the agency for more information and is awaiting response.

While the island quickly grew over the past 16 days of lava flow, it is not expected to last. While islands created by underwater volcanoes can persist for years, they are typically short lived. For example, Home Reef has had four periods of eruptions. During two of these periods, small islands formed.

When nearby Late'iki erupted for 12 days in 2020, the island it created washed away in two months. But an island created by a Late'iki eruption in 1995 lasted 25 years.

In January, Tonga experienced a devastating volcanic eruption on the island, which spewed debris up to 25 miles into the atmosphere and triggered tsunami waves. The country was smothered in smoke and virtually cut off from communicating with the rest of the world after the eruption, which NASA described as more powerful than the Hiroshima atomic bomb.