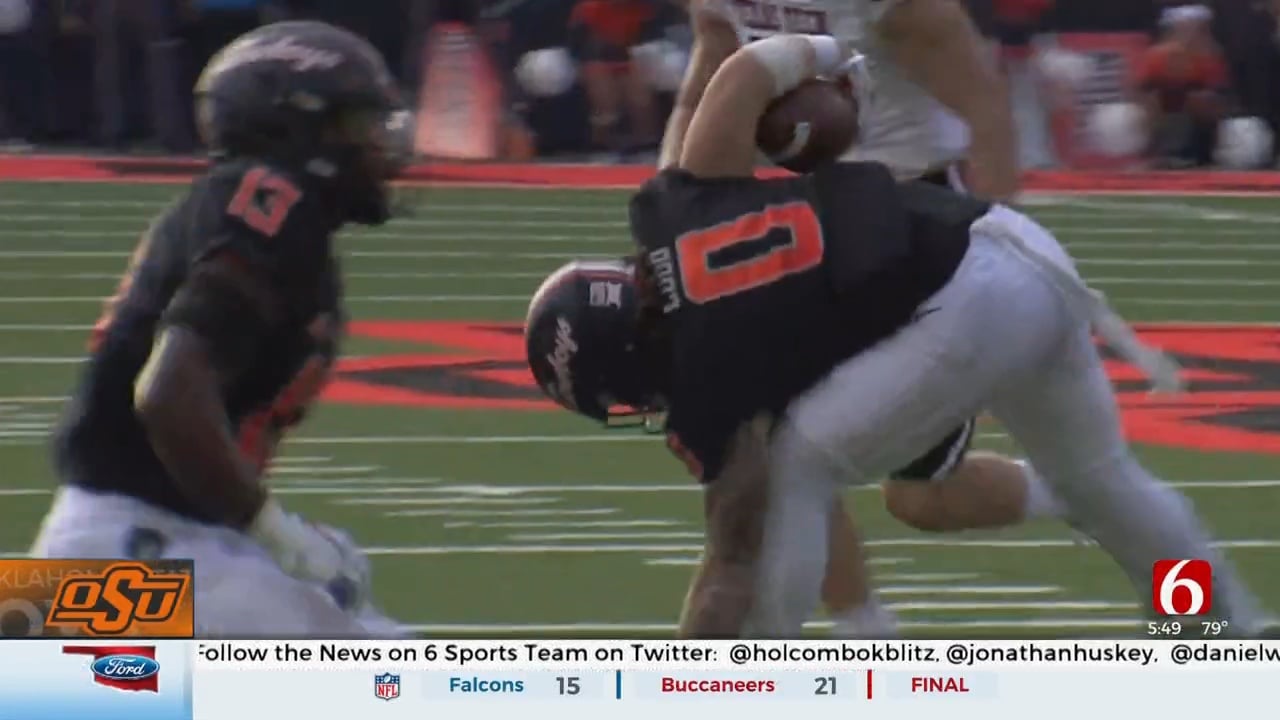 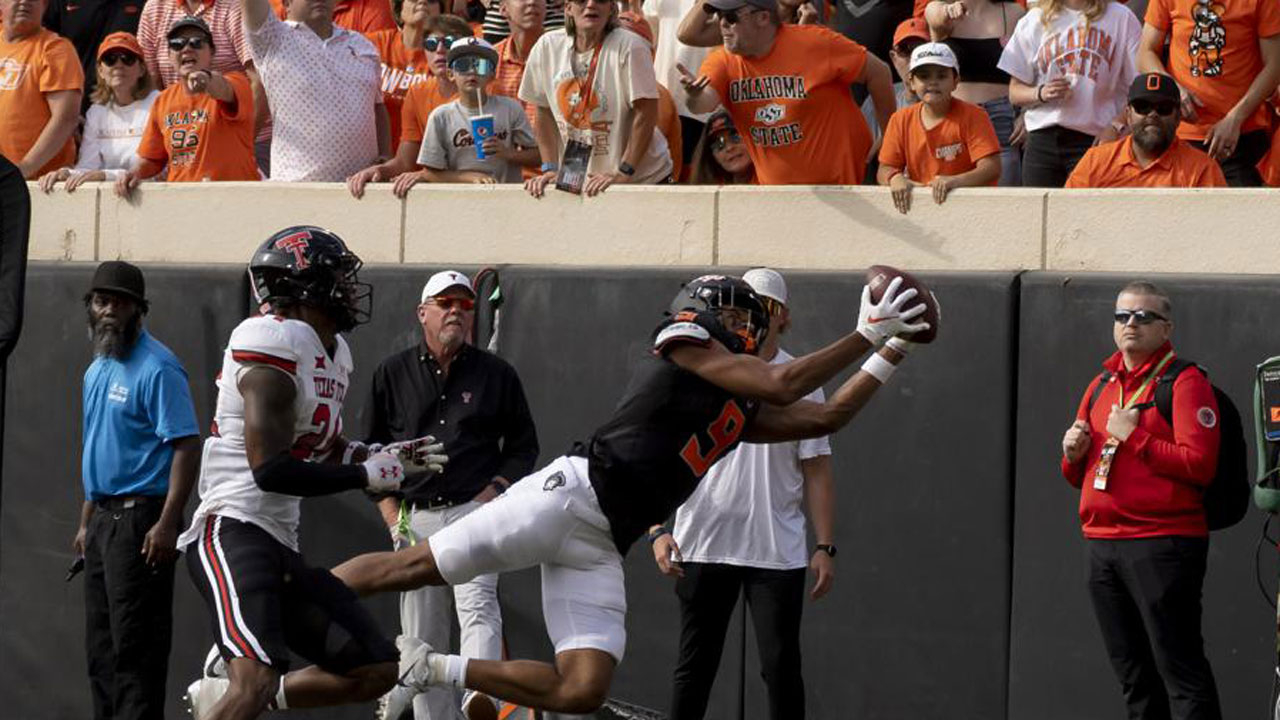 Spencer Sanders and the Cowboys (5-0, 2-0) played host to the Texas Tech Red Raiders (3-3, 1-2) on Saturday for Oklahoma State’s second conference game of the season.

The Cowboys-Red Raiders series goes way back, with the first matchup coming in 1935 when Texas Tech defeated Oklahoma State 14-0.

Before joining the Big 12 in 1996, Oklahoma State and Texas Tech played 23 times, most notably, in Tokyo, Japan, where Heisman-winning running back Barry Sanders capped off his spectacular season playing in the Coca-Cola Classic on Dec. 3, 1998.

Sanders was taking handoffs from a quarterback with a familiar name, Mike Gundy, and he ran for 332 yards and four touchdowns as OSU won 45-41.

So what’s so special about this one? The all-time series record between these teams, coming into Saturday’s matchup, is 23-23-3. This game, if nothing else, was for bragging rights.

In a back-and-forth matchup with a scrappy Texas Tech team, Oklahoma State earned the bragging rights.

Spencer Sanders threw for nearly 300 yards, Bryson Green caught five catches for 115 yards with a touchdown and the Cowboys defense kept the Red Raiders in check, winning 41-31 to keep the home-winning streak and undefeated season alive.

Related Story: Sanders, No. 7 Oklahoma State Get Past Texas Tech, 41-31

Texas Tech came into Stillwater with a rookie, 51-year-old Head Coach in Joey McGuire. If you don’t know much about McGuire, join the club. But give him credit for how he has the Red Raiders playing this season. Compared to recent history, this team passes the eye-test in terms of competency.

McGuire has spent the last five seasons moving up the coaching ranks at Baylor. He spent 20 years at Cedar High School in Texas before that, serving 15 of those as head coach.

The Cowboys have an 18-year veteran in Mike Gundy leading the team and on Saturday, in a tight game, he showed what it takes win close.

The most notable example of this came early in the game after Texas Tech had scored on the opening drive. To try an catch the Cowboys sleeping, Tech elected to onside kick it and to gain an extra possession.

Coach Gundy and the Cowboys were not sleeping. In fact, they were ready for the trickery.

Instead of attempting to field the kick, OSU’s Demarco Jones exploited a provision in the NCAA’s fair catch rule, saving the play while also giving the Cowboys better field position thanks to a kick catch interference call.

Two plays later and the Cowboys had tied the game.

The Cowboys may be led by Spencer Sanders, but there’s no doubt he surrounded by some dynamic talent around him on offense.

On Saturday, he completed passes to eight different receivers and five of them had multiple catches.

The leading receiver, sophomore Bryson Green, had scored three touchdowns this season but had yet to break 100 receiving yards. He did that against Texas Tech, with five catches, 115 yards and this spectacular touchdown.

In the backfield with Sanders, Dominic Richardson is a six-foot tall 210-pound back that doesn’t shy away from contact. He won’t jump off the stat sheet every game (19 carries, 67 yards, 1 TD), but he’s the guy nobody on the defense wants to tackle.

Sanders may not have played his best game of the season but being able to rely on the guys around you are just one of the many aspects that makes a team great. Sanders didn’t turn the ball over and got the ball to his playmakers when he needed to.

His two rushing touchdowns were a huge help, too.

Third Takeaway: It Only Gets More Difficult

Oklahoma State and TCU are the only undefeated teams left in the Big 12. Other than a one-off loss to Tulane, the Wildcats are undefeated and 3-0 in conference play. They’re technically at the top of the standings as of now.

The conference is as open as it’s been in years and only two teams can make it to Arlington that first weekend of December.

In the next four weeks, it gets real for the Cowboys. Three games on the road against currently ranked opponents with a home game against Texas and Quinn Ewers sandwiched in-between.

Oklahoma State can afford to go 3-1 in this stretch and maybe even 2-2 if it wants to make it to Arlington, but for the Cowboys to break through and qualify for the College Football Playoff for the first time ever, they might have to run the table.

There’s no G5 teams to steal a spot this year like Cincinnati in 2021, but there are a couple teams out west that are undefeated and making some noise.

Weird things can happen in college football when a bunch of 18 to 22-year-olds have to play on the road. Trips to TCU, Kansas and Kansas State won’t be easy, but this time four weeks from now, we’ll know just how real the Cowboys are this season.