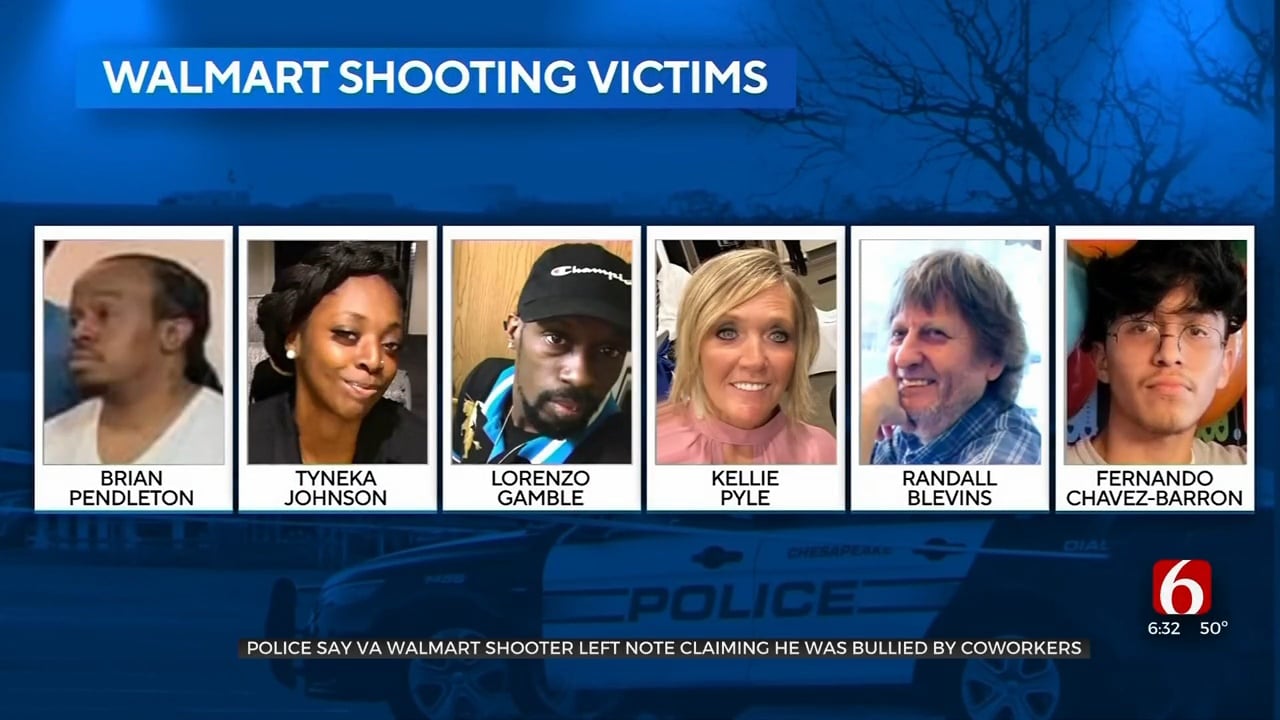 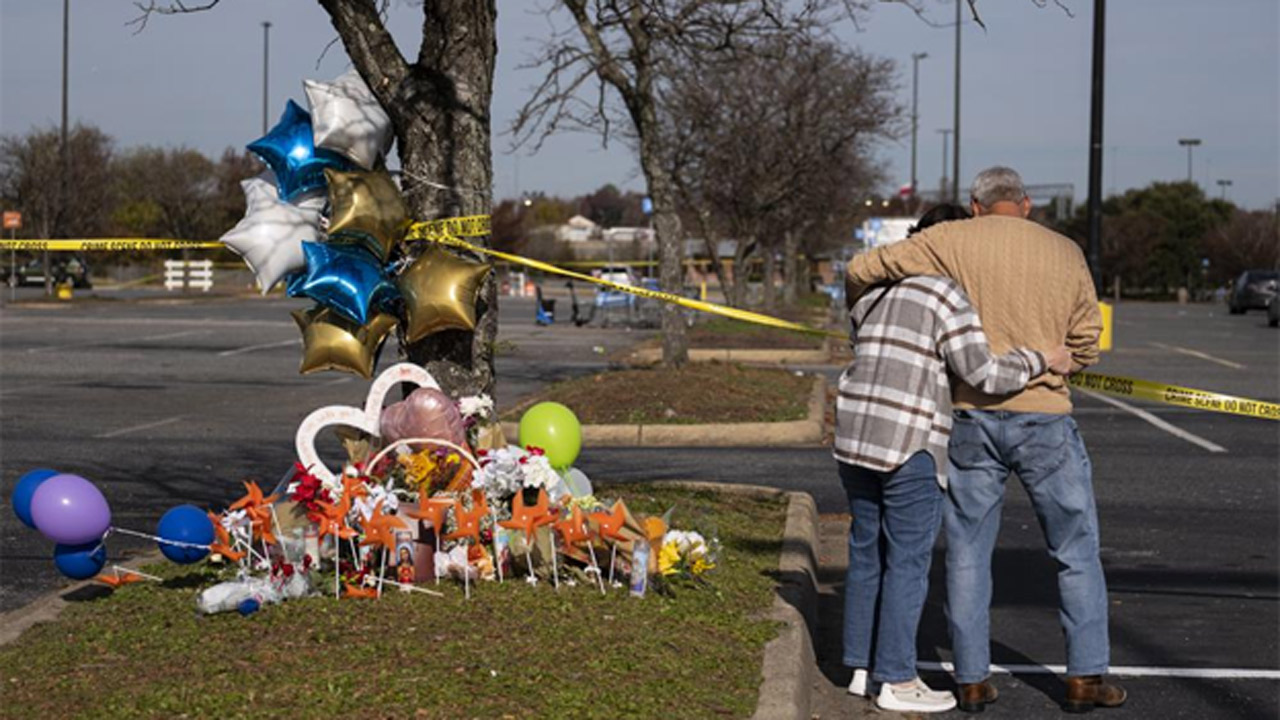 The Walmart supervisor who shot six co-workers to death at a store in Virginia bought the gun just hours before the killings and left a note on his phone accusing co-workers of mocking him, authorities said Friday.

“Sorry everyone but I did not plan this I promise things just fell in place like I was led by the Satan,” Andre Bing wrote on a note that was left on his phone, the Chesapeake Police Department said Friday.

Police said the 9 mm handgun used in the Tuesday night shooting was legally purchased that morning and that Bing had no criminal record. They released a copy of the note found on his phone that appeared to redact the names of specific people he mentioned.

It was not clear when the note was written, but in it Bing claimed he was harassed and said he was pushed to the brink by a perception his phone was hacked.

He wrote, “My only wish would have been to start over from scratch and that my parents would have paid closer attention to my social deficits.” Bing died at the scene of an apparent self-inflicted gunshot wound.

Coworkers of Bing who survived the shooting said he was difficult and known for being hostile with employees. One survivor said Bing seemed to target people and fired at some victims after they were already hit.

Jessica Wilczewski said workers were gathered in a store break room to begin their overnight shift late Tuesday when Bing, a team leader, entered and opened fire. While another witness has described Bing as shooting wildly, Wilczewski said she observed him target certain people.

“The way he was acting — he was going hunting,” Wilczewski told The Associated Press on Thursday. “The way he was looking at people’s faces and the way he did what he did, he was picking people out.”

She said she observed him shoot at people who were already on the ground.

“What I do know is that he made sure who he wanted dead, was dead,” she said. “He went back and shot dead bodies that were already dead. To make sure.”

Wilczewski said she had only worked at the store for five days and didn’t know with whom Bing got along or had problems. She said being a new employee may have been the reason she was spared.

She said that after the shooting started, a co-worker sitting next to her pulled her under the table to hide. She said that at one point, Bing told her to get out from under the table. But when he saw who she was, he told her, “Jessie, go home.” She said she slowly got up and then ran out of the store.

Former coworkers and residents of Chesapeake, a city of about 250,000 people near Virginia’s coast, have been struggling to make sense of the rampage.

Bing’s death note rambles at times through 11 paragraphs, with references to nontraditional cancer treatments and songwriting. He says people unfairly compared him to serial killer Jeffrey Dahmer, and wrote: “I would have never killed anyone who entered my home.”

And he longs for a wife but says he didn’t deserve one.

Some who worked with Bing, 31, said he had a reputation for being an aggressive if not hostile supervisor who once admitted to having “anger issues.” But he also could make people laugh and seemed to be dealing with the typical stresses at work that many people endure.

“I don’t think he had many people to fall back on in his personal life,” said Nathan Sinclair, who worked at Walmart for nearly a year before leaving earlier this month.

During chats among coworkers, “We would be like ‘work is consuming my life.’ And (Bing) would be like, ‘Yeah, I don’t have a social life anyway,’” Sinclair recalled Thursday.

Sinclair said he and Bing did not get along. Bing was known for being “verbally hostile” to employees and wasn’t particularly well-liked. But Sinclair also said there were times when Bing was made fun of and not necessarily treated fairly.

Police have identified the victims as Brian Pendleton, 38; Kellie Pyle, 52; Lorenzo Gamble, 43; Randy Blevins, 70, and Fernando Chavez-Barron, 16, who were all from Chesapeake; and Tyneka Johnson, 22, of nearby Portsmouth. Chavez-Barron’s name was released Friday; it had been withheld previously because of his age.

A Walmart spokesperson confirmed in an email that all of the victims worked for the company. Two others who were shot remained hospitalized, police said Friday. One is still in critical condition, and the other is in fair to improving condition

Another Walmart employee, Briana Tyler, has said Bing appeared to fire at random.

“He was just shooting all throughout the room. It didn’t matter who he hit,” Tyler told the AP Wednesday.

Six people also were wounded in the shooting, which happened just after 10 p.m. as shoppers were stocking up ahead of the Thanksgiving holiday. Police said they believe about 50 people were in the store at the time.

Bing was identified as an overnight team leader who had been a Walmart employee since 2010. Police said he had one handgun and several magazines of ammunition.

Tyler said the overnight stocking team of 15 to 20 people had just gathered in the break room to go over the morning plan. Another team leader had begun speaking when Bing entered the room and opened fire, Tyler and Wiczewski said.

Tyler, who started working at Walmart two months ago and had worked with Bing just a night earlier, said she never had a negative encounter with him, but others told her he was “the manager to look out for.” She said Bing had a history of writing up people for no reason.

The attack was the second major shooting in Virginia this month. Three University of Virginia football players were fatally shot on a bus Nov. 13 as they returned from a field trip. Two other students were wounded.

The Walmart shooting also comes days after a person opened fire at a gay nightclub in Colorado Springs, Colorado — killing five and wounding 17. Tuesday night’s shooting brought back memories of another attack at a Walmart in 2019, when a gunman killed 23 at a store in El Paso, Texas.

Wilczewski, who survived Tuesday’s shooting in Virginia, said she tried but could not bring herself to visit a memorial in the store’s parking lot Wednesday.

“I wrote a letter and I wanted to put it out there,” she said. “I wrote to the ones I watched die. And I said that I’m sorry I wasn’t louder. I’m sorry you couldn’t feel my touch. But you weren’t alone.”