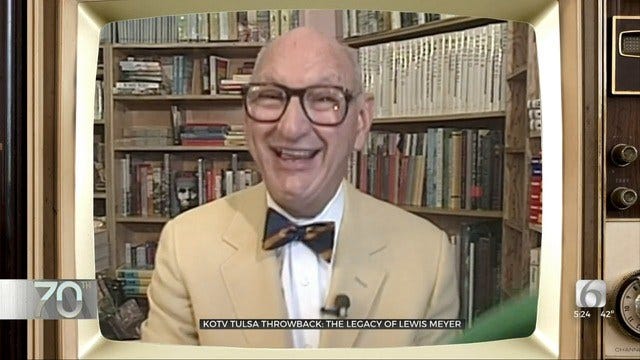 One of the most beloved on-air personalities at KOTV was Lewis Meyer. He grew up in Sapulpa, went off to school at Dartmouth University and the University of Michigan Law School, but it was books he loved most.

In 1952, Meyer and his wife opened a bookstore on the corner of 34th and Peoria. It wasn't long before he had a regular spot on KOTV doing book reviews.

"He had such charisma. He was so theatrical and dramatic," remembers former News On 6 anchor Glenda Silvey.

His "Lewis Meyer Bookshelf" became the longest-running book show in America. Every show ended with a memorable expression of Meyer's love of reading.

"Remember, the more books you read, the taller you grow," said Meyer.

He did occasional spots on "CBS This Morning" with Paula Zahn. Silvey believes that if Meyer had lived during this age of YouTube and social media he would have been an even bigger hit.

"If he had had the opportunity to be seen by millions of people, he would have been an international star," Silvey says.

70 Years Of Service For Oklahomans